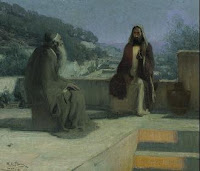 This is the first in a series of 'Guest Articles' written by readers of the Bible illustration blog. In the first one, Paul Green from Virginia talks about Bible artist Henry Ossawa Tanner

Henry Ossawa Tanner (1859-1937)
The first African-American artist to achieve international recognition and acclaim, his style has been described as “vital and transcendent” by fellow artist Romare Bearden.
Born in Pittsburgh, Pennsylvania to an affluent family, Tanner’s father was a Bishop in the African Methodist Episcopalian Church and his mother Sarah Tanner, a teacher and former slave. Tanner left America for Europe in 1891 and enrolled in the Acadamie Julian in Paris, France. The cosmopolitan and liberal atmosphere of the city was a welcome relief from the racial prejudice he had encountered in America and it was during this period that he painted his acclaimed Biblical works.

After marrying white opera singer Jessie Macauley Olssen, Tanner returned to New York in 1903 for the birth of his son but decided to settle permanently in France. The scandal caused by an inter-racial marriage played a major factor in his decision.
Tanner visited the Holy Land an several occasions and his first hand experiences of the local atmosphere and colour of the region give his Biblical work an authentic quality. His muted palette in “Flight from Egypt” creates an atmosphere of anxiety and fear, fitting the subject matter.

The features of Jesus in “Nicodemus visits Jesus” have caused much discussion and some controversy through the years. Is Jesus portrayed as a black man or is his face merely dark because he is in the shadows? Tanner remained ambiguous. When asked he concluded, “No artist has ever produced a type, nor ever will” regarding a definitive racial and ethnic representation of Christ.
Tanner exhibited regularly at the Paris Salon and won an honorable mention for “Daniel in the Lion’s Den”. He was made a Chevalier of the Legion d’Honneur in 1923 and became the first African American to be inducted in to the National Academy of Design in 1927.
© Paul Green 2008. 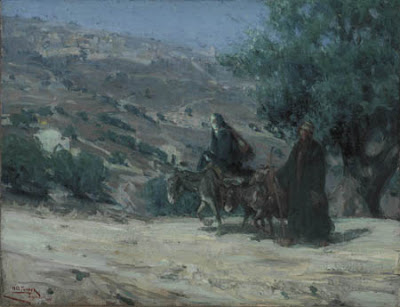 Thanks for introducing this Bible artist to us Paul!

I've not come accross Henry Ossawa Tanner before. Do you know if his pictures have been published in any Bibles? I'd like to see more of his work.

This site has links to some Tanner paintings Graham. As he was primarily a fine artist I'm not aware that any of his paintings have been published in Bibles. They are all owned by galleries and museums.

It is a great painting. I surfed the Internet and found a larger version, but was disappointed by it being black and white. Looking at the larger version, its seemed like Nicodemus has… side locks (hard to tell for sure – what do you think about that Graham?). I like how the light from the room below hits the steps. The long features in the face of Jesus in this painting reminds me of a Yemenite Jew. My only dislike relates to the hand of Jesus – hand and fingers seem oddly long. However, it is possible that it just seems that way in the black and white version – often the presense of color changes things. Sometimes, I see Biblical paintings that have an authentic feel and texture. It is as if the artist went there for reference. These types of works always touch me. This is one of those paintings.

Thanks horseman. I'm impressed that you recognized a Yemenite Jew in the features of Jesus. These are the words of Tanner commenting upon one of his visits to the Holy Land :

"It was my chance in Jerusalem to run across a little Yemenite Jew. Where could a better type be found than this swarthy child of Arabia, of purest Jewish blood—nurtured in the same land, under the same sun, and never neither he nor his ancestors, having quitted its (at times) inhospitable shores."

This link will take you to a large scan of the Nicodemus painting horseman. Click on the zoom tool on the page for the large version. I agree the fingers appear long but it is the eyes that have a powerful effect in the painting when you see the larger scan.

You can see that the glow coming up the stairs is lighting the face of Jesus. A nice touch!
The hands do look a bit unfinished.

Thanks for the link. In seeing the larger, colored picture I see that indeed Nicodemus has side locks? But... I think the piece looks better small. Looking at the larger piece, I see that it is rather loose. Some painters have that style. I prefer art that is a little tighter - still, its far better than I could ever accomplish.

It's nice to see the so-called fine arts hit this forum too. (Even though this is impressionism, not sure if the art-culture have classified it as 'high-art')

Thank you soo much for this. Great works. I'm gonna look for a book with reproductions from him. He depicted Jesus very well! The jewish looks and black hair really work. And he wouldn't stand out in a crowd, like on the road to Emmaus. Nice!

There are books available on Amazon nikolaj, including a recent biography.
Yes it is the Jewish nature of this work that attracts me and disturbs me a little. I look at all the major Jesus movies that have been made and I find it sad that none appear to have featured a Jewish Jesus. We have Americans, Italians, Spanish, English, Swedish, African-American and Canadian etc. actors all portraying a Gallilean Jew. Yet Hollywood has plenty of Jewish actors. Even Mel Gibson's supposedly authentic portrayal of the Passion featured an American actor. Why? Because he looked like the standard Jesus image familiar to all.
Tanner was ahead of his time with this image of Jesus. And probably still is today.

A very good point Paul.
Yes, we should return to a more Jewish Jesus!
I seem to remember that horseman did include the side locks (peyes) on one of his recent pictures. That's a step in the right direction.