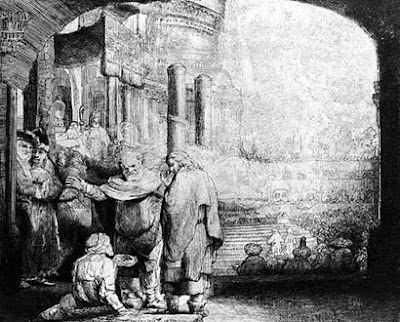 I recently came across a very interesting article on JSTOR titled 'Rembrandt and Josephus' by Franz Landsberger who I believe was professor of 'The History of Art' at the University of Breslau. The article was originally printed in the The Art Bulletin in 1954 and can be viewed here.

In the article professor Landsberger informs us that amongst the inventory of Rembrant's possesions taken in 1656 were the complete works of the Jewish historian Flavius Josephus. Landsberger goes on to show us that Rembrant studied the works of Josephus when working on his Bible pictures of the Temple. He comments:
Rembrandt has represented the Temple in Jerusalem on several occasions but never in such detail as in the etching of 1659, Peter and John at the Gate of the Temple. (See above). Where did Rembrandt get information about the appearance of this Temple?...........This Temple has been described in detail, though not always systematically and clearly, by the Jewish historiographer Josephus.........I maintain that the artist followed that description.

Landsberger also mentions how Rembrandt used the German translation of Josephus which omits certain details about Herod's temple which led Rembrandt to illustrate a round as opposed to a square altar. Rembrandt also places the altar at the top of the 12 steps leading to the temple. The Altar was in fact accessed by a ramp and was positioned in front of, and offset to the left of the 12 steps in the Temple court. (according to a diagram in The Quest').
It looks like a very interesting article although, not being a subscriber to JSTOR, I only have access to the first page of it! There is one observation that professor Landsberger makes about the canopy in Rembrandt's etching (above) though, that I disagree with. He writes:
The second gate, leading from the porch to the Holy, had a costly curtain which Josephus describes in Antiquities and the War of the Jews. He calls it a "Babylonian curtain" and praises its colors and patterns. Rembrandt, in order to show this curtain, has pulled it forward so that it spans the porch like a canopy. The portion of it which hangs down perpendicularly, shows an indication of the patterns mentioned by Josephus.

Pulling forward a curtain in the temple so that viewers could see it didn't sound to me like something that a Bible artist would do. Dr Leen Ritmeyer confirmed my doubts when he explained to me the purpose of this curtain.
"The veil was intended to screen the entrance to the sanctuary, so that people couldn't look into it when the doors were opened. It was never used as a canopy".
I believe that the canopy shown in Rembrandt's etching is just that, a canopy! Typical of the canopies that most Bible artists include in their pictures. I have gleaned one helpful bit of information from all of this; The entrance to the sanctuary was concealed either by the magnificent golden doors or, when the doors were open, by the "Babylonian curtain" described by Josephus in War 5.212
All comments welcome!

I meant to ask Leen Ritmeyer where the "Gate of the Temple called Beautiful" in Acts 3:1-10 is!

"The article...can be viewed here."

Not by everyone though. JSTOR is a plastic diamond choker on the chickenneck of academe.

Remember folks; you heard that quote first on the Bible illustration blog!