A Gift Returned with Love 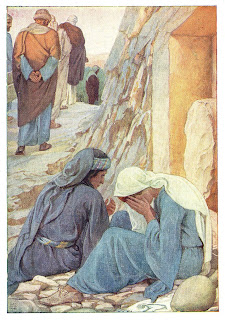 I am deeply indebted to Prof Sandy Brewer for the loan of the very rare book 'A Gift Returned with Love' which is a brief autobiography by Bible artist Elsie Anna Wood. EAW was 87 years old at the time of writing and was living in a nursing home in Norwich. She died 4 years later in 1978 at the age of 91.This is one of the most unusual books I've ever seen. It has obviously been self published presumably at a low cost and is very simply bound. It contains no pictures, and the text is in a typewriter font which gives it the feel of an original manuscript. Combined with the poor quality paper, the impression is given that this is an unimportant book which it most certainly is not! Anyone with an interest in Bible illustration will find this a wonderfully fascinating and important book! It deserves to be reprinted and fully illustrated with EAW's full color pictures.

EAW saw herself as a 'Missionary Artist', and a successor in this respect to Harold Copping. A Missionary artist is one who provides pictures for missionary societies to help them present the Gospel message. EAW was a missionary artist in the true sense as not only did she go to live amongst the people that she was drawing, but just as a missionary has to learn a new language in order to effectively communicate, she also adapted her style of illustration, or rather she learned the 'visual language' of the people in order that her illustrations would be better understood by them. When in Egypt she wrote:
"...everything had to be noted and learnt, before I could begin to draw in a way which would be familiar and acceptable to the children who knew only their own country and its ways". She also makes an interesting observation about light and shadow in the Holy Land.
"Here I observed that even in representational paintings there was no use of shadows, as we are accustomed to see in Europe.....I began to perceive that this flat shadowless treatment was in fact due to the actual appearance of things in intense light. For the strong sunlight on the ground reflects light onto vertical surfaces, almost abolishing shadows". She also wrote "I found that when at the first I drew in pen and ink, using fine lines and cross-hatching for shadows to which I had been accustomed, the comment might be "Why has he got dirt on his face?" So I learnt that I must follow the Eastern manner and do without shadow....Although at the time I did not realise it, this study was for me equivalent to the language study with which most people started their missionary career. I was learning not word language but picture language".

EAW was especially thrilled to visit Jerusalem. She wrote "I am in love with Jerusalem. It is a much more beautiful place than I had imagined." she did regret not staying in the Jewish quarter of the city however, as she explains "It is probable that if I had lived in that Jewish Quarter I should have painted my pictures with more of the Hebrew rather than Arab touch."

When asked how long it might take her to complete the task of illustrating the 'Life of Christ' in fifty pictures, EAW estimated two years. She later commented "I had at first, in my ignorance, estimated that I would need two years to complete fifty pictures-!! Then I thought that they could be done in five years. Finally, with some other work undertaken, I found that 35 years had passed when nearly one hundred had gone to press. She had commented earlier "I don't want to sacrifice quality to speed though, in fact I just can't."
Sandy Brewer informed me that EAW had been involved in a car accident while in the Holy Land which had affected her eyesight.
EAW had hoped to be able to complete 100 Bible pictures, and despite problems with her eyesight, she still managed to complete 95! 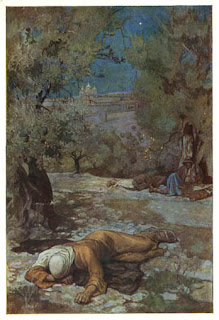 EAW's research was second to none! In 1934, in preparation for her pictures of the Nativity she travelled to Bethlehem and sketched the landscape and the people. Later, when she had to draw Jesus in the Garden of Gethsemane, (see left), she travelled to Jerusalem and stayed in a little hostel belonging to the Greek Orthodox Convent which was situated in the upper garden itself. EAW comments "For the Gethsemane drawing, I had to get my information about the probable position and appearance of things. It would have been a moonlight scene, for Passover was at the time of full moon." While at the convent she would go out at night "to sit among the olives and try to determine what exactly is the colour of moonlight. I made rough charcoal studies of the trees (one cannot paint by moonlight) then I would come indoors and colour my sketches according to what I remembered, and out again, till I became too weary."
After EAW describes in her book the great lengths she went to in choosing the location for the Crucifixion picture, she says "Of course such detail as this makes no difference to the intrinsic truth of the story, but it does make a considerable difference to the maker of the picture, for the sense of actuality of a definite place and situation creates a firm basis on which the scene can be built up in one's mind." I agree with this comment wholeheartedly. If all the detail that Bible artists include in their pictures only satisfies them, it's been well worth the effort!

I found the book thrilling! I could associate with so much of what EAW speaks about, even down to the way she chooses a paintbrush! But what is most helpful is the wonderful way that EAW vividly describes the colors and scenery of the Holy Land. This book can only be described as a feast! I'm so glad that EAW wrote this book. In her closing remarks she writes "I look back to the day when, singing in the Sunday School, I mentally decided to be "on the Lord's side". A child's resolution has never been regretted. And as I trace the series of events which led to the task of painting the life of Christ, I see that He has acknowledged my resolve. For hardly a Sunday School or even a Day School is without at least some of my pictures of that life.
But how very much of their value depends not only on the pictures but upon the teachers who use them, giving children an awareness of Christ, His love and His power."
Elsie Anna Wood was a special lady with a great gift. A gift that she used for her Lord. It was a 'Gift returned with Love'.

Graham, How absolutely touching. She sounds like a very special person. Is there any chance that her book would be brought back? That is one book I would purchase if there were any chance. I knew when I first saw her pictures there was just something wonderful about them, and her. Deboraw

P.S. I find the woman's shoe in the first picture to be interesting. It doesn't appear to be the typical sandal. What, I am wondering, are the 'Arab' touches that she speaks of (instead of the Hebrew/Jewish touches)? Deboraw

Hi Deboraw, I did see one copy for sale last month on the internet. It was selling for £25 which at the present exchange rate would be about $46.5 + p&p. The seller was on a farm only a few miles away from me too!
Search for it on antiqbook.com

Yes, that shoe was interesting. I noticed that too. EAW Drew a lot from both Jewish and Palestinian models. Just as she was influenced by the buildings that existed when she was in the Holy Land, it's possible that certain items worn by these models seemed biblically authentic to her. In fact many of these items probably were as I believe fashions changed very little, especially in the poorer regions.

Elsie Anna Wood possessed great talent and a humble spirit. Thanks for sharing her thoughts Graham. I find them of great interest. It's sad that such a talented lady had to self publish. A rather pathetic comment on the UK Christian publishers of the time who didn't have the foresight to recognize her contribution to Christian art and preserve her story for posterity.

My feelings exactly Paul!
I hope that a Christian publisher might still decide to publish one. I think that S.P.C.K. own the © on most of EAW's Bible pictures so possibly they might consider publishing one.

Most full time Bible artists know that they will never be wealthy. Bible art is a vocation. Elsie Anna Wood, on the eve of becoming a missionary artist, wrote in a letter to her parents:
"It will be as clear to you as it is to me that I stand to be a poor woman - never having been a rich one, I shall most probably have less to go and come on than ever before. Well, I had faced up to all that before ever this came upon me. I had been seeing how the follower of Jesus is to take what comes, not grabbing or expecting more than sustenance day by day. I had seen it and accepted it as a working principle straight out of the Gospel.