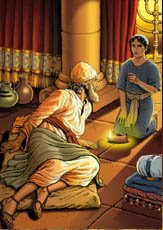 Before illustrating the picture (right) of Samuel and Eli, I wanted to gather some information about where this scene was taking place. In the first few verses of 1 Samuel chapter 3, a Temple is mentioned. But which Temple is it speaking of? Solomon's Temple had not as yet been built. Rabbi Naftali Silberberg sheds some light on this...

After the Israelites crossed the Jordan river into Canaan, the portable Tabernacle was erected in the city of Gilgal, where it remained for the fourteen years it took them to conquer, divide, and settle the land. After that, the Tabernacle was dismantled, but the tapestries and rugs which covered it were taken to the city of Shiloh where they covered a newly built stone, fixed albeit roofless, sanctuary. This Tabernacle stood there for 369 years until it was destroyed by the Philistines during the lifetime of Samuel.

So it would appear that, in Shiloh, which was the religious capital of Israel in the time of the Judges, a more robust version of the Tabernacle was built in stone. A precursor to the Temple.
I presume that the reason that this structure was roofless was that it retained the Tabernacle tent coverings. For an artist's impression of what the Tabernacle/Temple in Shiloh may have looked like, click here.
There also appears to have been some sleeping chambers added close to the sanctuary for the High Priest and his attendant, and the addition of some doors, (1 Samuel 3:15). Some commentators say that the sleeping accommodation for the Levites and priests was provided in tents next to the Tabernacle.
The scene takes place in the early hours of the morning before the lights of the golden lampstand were extinguished. These lamps were extinguished at sunrise, (Lev 6:12,13). The light source for this scene is provided by the seven branched solid gold lampstand which was 18 handbreadths in height and over 100 Ibs in weight! I have decorated this lampstand or 'menorah' with almond blossoms according to the description in Ex 25:31-40.

According to Josephus, Samuel was 12 years old when the Lord spoke to him. Eli, who was one of the last Israelite Judges, (before the Israelite monarchy began), is seen wearing the seamless white under garment worn by the priests. His high priestly robes which included the turban or mitre, the sleeveless blue robe and the ephod are folded next to him. You can see the bells and pomegranates woven from scarlet, purple and blue wool along the hem of the ephod.

As always, your comments are welcome!

Related posts:
The Day of Atonement
What did Herod's Temple look like?
Being Roofless!
Posted by Bible artist at 1:23 pm

Dear Graham,
This is a very poignant and beautiful illustration of Samuel and Eli demonstrating a very warm relationship. The question you ask about which Temple the text is referring to is a good one. I believe the text itself is very helpful; "..in the 'Heckhal' (Temple) wherein is placed the Ark of Elokin (God):3:1. In almost all biblical translations the word 'Heckhal' is translated as 'temple' or 'palace'. This is because the temples were often referred to as 'heckhal'. 'Heckhal' actually means 'sanctuary' in Hebrew. More often the Temples are referred to as "Bet HaMikdash' or the 'sanctified (Holy) house'. The 'tabernacle' was not referred to as 'Hechal', but in Hebrew is called the 'Mishkan'. The Hebrew root word for this is 'shackan' or 'dwell' i.e the place where God's spirit dwells. Thus all post-tabernacle temporary or permanent dwelling places for the Ark of God are referred to as 'Heckhal'. But not all 'Heckhals' are 'temples'.
Thanks once again for this very meaningful illustration.

Graham, This is one reason I'm so very impressed with your blog. Not just the excellent quality work...my youngest son was the one who 'discovered' this latest one on Sunday morning just before we left for services--he was impressed also...but the excellent feed back that is included. Thank you to both yourself, and Nahum. I just love reading (and yes, re-reading) these posts! Deboraw

Thanks for your kind words Deboraw! It's great to know that other members of your family are checking out the blog too!
Yes I agree, Nahum's comments are amazing!
It's really helpful to hear comments that are from a Jewish perspective. Nahum's comments are a great asset to the blog. Thanks again Nahum!

Nahum has kindly written a 'Guest post' for the B.I.B. which describes how he goes about producing his Bible art. I will be uploading this in the next day or so!

Graham, Your artwork is consistently stunning- and they seem to beome more painterly with each new piece. I always appreciate the explanation of the thought process that goes into the visual interpretation. thank you for being an inspiration to us all.
Earnest Graham, Virginia, USA

Thank you Earnest. What has been happening over time is that my line work is becoming less noticeable and I am spending more time thinking about light and shadow. This does create more of a 'painted' look.

In the early days my line work was bold and black and my colors were flat. This probably came from my days as a cartoonist!

I should read more of the bible. There are lots of interesting story you can read in it.