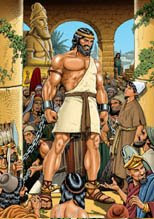 I have Just finished illustrating a picture of Samson from Judges chapter 16 for our upcoming Bible. Most children's Bibles show Samson in the process of pushing over the two key pillars that supported this vast temple, so I thought that I would depict the scene that led up to this event instead. Incidentally, if you are interested to read about Samson's physique, we have discussed this before in the 'Was Samson Muscular?' post.

In the picture above you can see Samson being taunted by the Philistines. From reading the text in Judges 16 it does sound like this scene is taking place in a building dedicated to the worship of Dagon. Dagon appears to be either a god of grain and agriculture or a fish god, (half man, half fish). I decided to go for the latter and based the stone statue in the background on ancient stone carvings thought to be of Dagon. In 1 Samuel chapter 5, we read about when the Ark of the Covenant had been captured and was placed by the Philistines before the statue of Dagon. When the statue fell prostrate before the Ark for the second time, we read that both its head and hands were broken off. No mention of legs, which might give credence to the fish god theory. This might be interesting to discuss further.
At the bottom right of the picture you can see one of the priests of Dagon. He is wearing the fish-head mitre and cape as depicted on ancient carvings showing the priests of Dagon.
Incidentally, and while on the subject of fish, we are in the Jewish month of Adar. The month of Adar has a sign which is the fish! The reason for this is that traditionally this is the month that the fish in Israel spawn. The Hebrew word for fish is 'dag'. (I thought you might find that interesting!) Anyway, back to the story.

Samson was blinded and bound with fetters of brass. This was a common punishment used also by the Babylonians, Assyrians and Persians. We read in 2 Kings 25:7 that Zedekiah was punished in the same way. There are a pair of ancient bronze fetters in the British Museum that were found in Ninevah. I would describe them as a sixteen inch brass rod with a two pronged fork at each end. These two prongs were hammered around the ankles of the prisoner allowing only short steps to be taken. The chains that I have illustrated around Samson's wrists are not mentioned!
At the bottom left of the picture you can see a Philistine soldier wearing the feathered helmet depicted on the ancient carvings in the temple of Ramesses III.

Samson is stood at the central point of the temple between two of the load bearing pillars. The light coming from above is from a large central opening in the roof above. The reason that I believe that there was a large central opening in the roof is that the text suggests that the three thousand people stood on the roof were able to see Samson being taunted. It makes sense that if two of these load bearing pillars that lined this central opening were toppled how the entire building would collapse. If you look through the arches at the back of the picture you can see that the temple is built on high ground. Buildings used for the worship of pagan deities were always built on high ground as this was thought to be nearer to the heavens where their gods dwelt. These are referred to in the Bible as the 'High places'.

Delilah is stood in the shadows under the arches and next to the stairs which led to the roof. As always, I look forward to your comments.

"The month of Adar has a sign which is the fish! The reason for this is that traditionally this is the month that the fish in Israel spawn. The Hebrew word for fish is 'dag'."

As a person born in the month of the sign of the fish - Pisces - I find your comment above interesting Graham. I had no idea the Jewish calendar also associates March with fish. And that there was a fish-god named Dagon. This part of the Samson story passed me by for some reason.
Great research as usual Graham.

You may find this of interest Graham. John Roskoski PhD commenting on Dagon on the "Associates For Biblical Research" website - www.biblearchaeology.org

"Most scholars argue that he [Dagon] was originally a vegetation, grain and wheat, deity. The name is very similar to the Hebrew word for “grain”, dāgān. This would create an interesting irony in the Samson narratives, as Samson was forced to grind wheat for the Philistines (Judges 16). However, some descriptions seem to make Dagon a storm-god, possibly in connection with the need of rain for the wheat and grain harvest.

However, Dagon in iconography Dagon is often presented as fish-god. This depiction has survived the centuries and is quite controversial. The reason it has survived is the similarity of the name to the Hebrew term dâg, meaning “fish”. This connection was first popularized by Rashi, Rabbi Shlomo Yitzhaki (AD 1040-1105), author of an extensive commentary on the Tanakh. He imagined, based on this connection to the Hebrew term dâg, that Dagon was in the shape of a fish.

David Kimhi (AD 1160-1235), Medieval Rabbi and Bible Commentator, expanded upon the interpretation of Rashi. In his comments on 1 Samuel 5, wherein the Philistines placed the Ark with Dagon, he interpreted the statement “only the flat part was left to him” (1 Samuel 5:4) as meaning “only the form of a fish was left”. He reasoned that since the text mentions “hands”, Dagon was in the in the form of a fish from the waist down, hence the name, and in the form of a man from the waist up. One must note that the LXX mentions both hand and feet.

In 1928, H. Schmökel argued that Dagon was never a “fish-god”, half-man and half-fish. However, once his cult became important to the sea-faring and maritime peoples, such as the Phoenicians and Philistines, the false connection to dâg (fish) had a powerful impact on Dagon’s iconography."

Dear Graham,
The amount of research that has gone into this illustration is quite incredible, and fascinating.
Because the words Dagan (DGN) and Dag (DG;fish) in Hebrew share the same first two letters (DG) I can see why many people are uncertain as to what the origin and the meaning of the god Dagan is, and what his name means i.e. either god of grain or fish-god. Despite sharing the same first two letters it appears that these two names (Dag and Dagon) are distinctly two different words with two completely different meanings.
I looked up Dagan in the Encyclopedia Judaica, and there was some interesting points some of which I can summarize: Dagon first appears, not as a god of crops(grain), in Akkad dynasty documents (23rd century BCE).In parts of the Euphrates, certain regions were called "the lands of Dagon" as Dagon was recognized as the "god-king of the land".
In Ugaritic documents (15th-14th centuries BCE)his name alludes to his origins as a god of grain ;Ugaritic dgn, Hebrew dagan. In Ugaritic one of Baal's epithets is "Son of Dagon". He was sometimes held by the Canaanites to be identical with "the father of gods". Philo of Byblos (first century CE) identifies Dagon with Chronos, the father of Greek gods. The Philistines accepted Dagon as their god, but they weren't the first to worship him.
It is also intersting to note the painting in West wall panel 13 of the Duras Europos synagogue in Syria (300 CE) that depicts the ark of the covenant placed by the Philistines in the house of their god Dagon in Ashdod. One sees two smashed statues of Dagon; one with a severed head from the rest of his body, and another statue with one severed foot. This painting suggests that there was more than one statue of Dagon in his temple. However, what is intersting to note is that Dagon in this painting is represented with a full human body, and is not half-man/half-fish. I am not certain but it looks like Dagon has a sword held in place by his belt.
It would be interesting to find out , Graham, the source of the fish iconography, you are referring to. Paul,with respect to Rashi's interpretation, he usually get's it right, and is an excellent linguist. So I guess the true meaning of Dagon is still up in the air.

Paul G and Nahum:
Many thanks. Very helpful and informative comments! (As always).
Yes Paul, I did read that the Septuagint text of 1 Samual 5:2-7 mentions that both the arms and the legs of the image of Dagon were broken off. Fortunately, Samson is stood in front of this part of the image so you can't see that I've drawn the bottom half of Dagon as a fish! This will give me more time to research this further!
I have finally managed to find some of the images of the frescoes from the Dura-Europos synagogue on the Yale Divinity School website! Thanks for bringing these to my attention Nahum.

I've just read in 'Manners and Customs of the Bible that "The Babylonians believed that a being part man and part fish emerged from the Erythraean Sea, and appeared in Babylonia in the early days of its history, and taught the people various arts necessary for their well-being. Representations of this fish-god have been found among the sculptures of Ninevah. The Philistian Dagon was a similar character.
The deity is supposed to have been intended to represent the vivifying and productive powers of nature. The fish was an appropriate image to be used for this purpose, by reason of its rapid and enormous multiplication."

The other reason that I opted for the fish-god theory, which I forgot to add to the initial post, was that the Philistines were a coastal people with strong connections to the Mediterranean Sea, and its been noted that the bronze overlapping scales on Philistine armor represented 'fish scales'! Although in 'The military history of ancient Israel' it mentions that this type of fish scaling was also typical of Egyptian and Canaanite armor too.