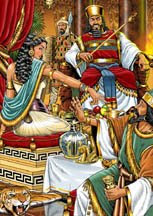 On the right is a recently finished picture of Esther for our up-coming children's Bible. As I mentioned in an earlier post, I was so impressed to read how Sir Lawrence Alma-Tadema would visit the British Museum to sketch Egyptian artifacts to include in his Bible pictures, that I decided to visit the British Museum website myself! All the ornate golden cups, the ceramic pot and the golden jug in the picture are based on actual ancient Persian artifacts which are on display at the British museum.

I was amazed, when researching the Persian army, to find how ornate their uniforms were. They wore highly patterned tunics and trousers which you can see on the soldier in the background. I would hate to illustrate a Persian battle scene! There has been some criticism of the depiction of these Persian soldiers in the movie '300' but apart from the silver masks, they were not far out. I would have to say though that the depiction of King Xerxes was way off! We have ancient carvings of King Xerxes in the ruins of Persepolis that give us some idea of what Xerxes looked like.

In the picture, Esther is pointing an accusing finger at Haman, identifying him as the evil schemer plotting to destroy her people. The story of Esther, (the events of which took place around 483-471 B.C.) is still remembered and celebrated today in the Jewish holiday of Purim. It's a fun time when all the children dress up as characters from the story.

I attended a presentation last Sunday evening, held at Mills Hill Baptist church, on all of the Jewish feasts. This has been a fascinating study held over four weeks. The presentation was given by a Jewish friend of mine, and he mentioned last Sunday, in passing, that although God is not mentioned in the book of Esther, in the Hebrew scrolls of Esther all the names of God can be found written vertically or diagonally, in the same way that we find words hidden in a word-search!

There's a timely reminder in the story of Esther for our world leaders today, and it is this; There are consequences when meddling in the affairs of Israel!
My attention was drawn this week to Zechariah chapter 12 and particularly verse 10.
Posted by Bible artist at 12:47 pm

Graham,
Congratulations once again on creating a beautiful ,colorful and realistic biblical portrayal combining an amazing level of artistic skill with rigorous archeologically based research on the subject. Your commentaries and Zecahria reference are also appreciated.

I would love to share some of my stuff - once I figure out how.
I'm a pastor and have been drawing the art for our church's buletin covers for almost 10 years now (re-issuing some images out of the "archives" from time to time).

Cool blog! Your artwork is really amazing! I read your section on drawing the devil. I understand and agree with everything you said.

I've been drawing and painting for a while now. My interest has just shifted to graphic novels. I just finished my testimony. Your work and info on your blog are really inspiring.

Nahum:
Many thanks Nahum. I'm always encouraged by reading your comments. Yes, the prophecies in Zecharia are powerful! Israel needs our prayers at this difficult time. Let me know when you are uploading new Art to your website. I look forward to seeing that.

Drew:
Many thanks Drew, and thanks also for the pictures that you kindly sent me. You have the ability to capture a persons face in just a few lines! I would like to try a stylus and graphics tablet sometime. Some churches are getting quite high tech, although the transformation can be slow. I saw someone a few months ago using a power-point of a flannelgraph!!

Sol:
Many thanks Sol. Yes, it's always difficult knowing how to portray the devil. I find Cherubim difficult too! I know we have a description but it's a difficult one to decipher.
You have a very cool blog also! I look forward to reading 'The Conversion of Sol' when it's finished.