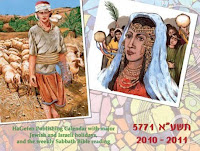 'Shana Tova' to all our Jewish readers! Yes, Rosh HaShanah (The Feast of Trumpets) is here again so I thought that I would take this opportunity to give a plug to HaGefen Publishing's new calendar which runs from September 2010 to September 2011 (covering the Jewish year 5771). The calendar features devotional Bible verses and vibrant illustrations by our good friend Diana Shimon.

The illustrations are taken from the Modern Hebrew Children's Bible which Diana continues to work on. Volume four, which includes Job, Psalms and Proverbs, is due to be with the printer in October. The fifth and final volume, which will include the final books of the Hebrew canon - Ecclesiastes, Song of Songs, Ezra, Nehemiah, Esther, Daniel and the two books of Chronicles, is due to be completed in the next two to three years. For more information on the Modern Hebrew Children's Bible or to order a calendar, contact HaGefen publishing in Israel.

L'Shana Tova Tikosevu! (May you be inscribed for a good year!).
Posted by Bible artist at 12:02 am

Do you know how to contact the artist linked on your blog, Christian Dare? The link is not working and I can't find any other contact information for him.

Hi Eric
Thanks for reporting this dead link. I've had a quick search and unfortunately there appears to be no active links or contact details for Christian Dare. If he gets in contact I'll pass him on to you.