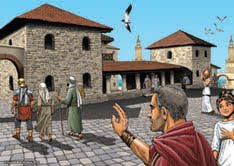 Acts 10 covers the conversion of the Roman Centurion, Cornelius, and his family. This is retold in 6 pictures. Picture 1 shows an angel appearing to Cornelius while he's in prayer. Picture 2, (left), depicts a Roman courtyard and shows Cornelius sending out two of his servants and a soldier to the seaside town of Joppa to bring Peter back. Joppa, (known as Jaffa today) lies 30 miles south of Caesarea. Across the courtyard and beyond the facing villas we can see the elaborate lighthouses which many believe were positioned at the entrance to the port of Caesarea. The paved courtyard was drawn from a photo of an actual Roman pavement. 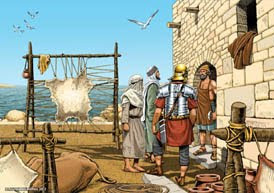 Picture 3 (right) shows the servants arriving at Simon the Tanner's house. Stretched animal skins are drying on frames outside this seaside house. Simon has one of the tanners curved bladed tools in his hand which were used in Bible times to remove the skins from carcasses. Picture 4 shows Peter on the rooftop seeing the vision of the 'unclean' animals being lowered before him. Picture 5 shows Peter, now at the rear of the house in the main tanning area, listening to the servants request. The final picture shows Peter at Cornelius' villa presenting the Gospel message to all present. I've tried to reconstruct the interior of a Roman villa with it's frescoed walls, mosaic floor and Roman shuttered windows.
Posted by Bible artist at 2:57 pm

I love how you incorporate so many details into your artwork--the knife, the skin, the tiles.... (I especially like the shadows in the first illustration in this post.) It really makes it feel like a captured moment in time!

Thanks Sheila - I appreciate your comments.

great work, it's lovely for the kids as well.