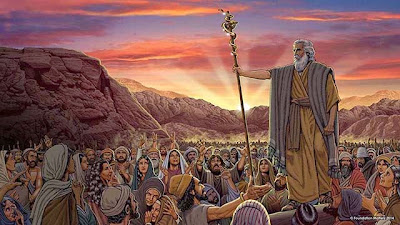 For the final day of my week long Blogathon I thought I would give an update on how the picture sets are progressing. As you may remember, we have changed the format to widescreen powerpoint, (16x9 approx), and this is working out well. The set I'm about to finish is the 12 spies spying out Canaan, (Numbers 13), in 5 pictures. The story completed before that was the 'Serpent of brass' (Numbers 21) in 6 pictures, (sample above). Before that was the Tabernacle and it's furniture in 9 pictures.
How am I getting on with the Cintiq? 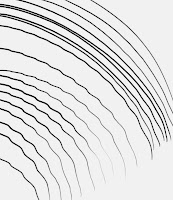 I'm still happy digitally colouring on the Wacom Cintiq although I've gone back to using brush and ink for my line work as I've still not found a programme that replicates a good brush line. Another peculiarity of the Cintiq is what someone has called 'Cintiq Jitter'. Take a look at the example on the left - the lines (top right) have been drawn quickly. As the lines progress to the bottom left the pen is traveling slowly over the cintiq's surface. See how the line goes wobbly? Even if you draw a line slowly with a rular, the line will be wavy! This can be annoying if you are trying to follow a pencil rough - your pen goes one way and the line goes the other! I was told by the Wacom helpline that this is caused by there being another computer close by - I tried shutting everything else down but it didn't help.
When I originally set up the Cintiq the main problem I had was trying to match the pen tip to the actual drawn line. I didn't think that I could get used to drawing if they didn't match up. When you ink in with a brush you are watching the very trip of the brush. Now, it's not so much of a problem as you soon get used to watching the cursor rather that the pen tip. Don't worry about getting them to line up - they won't!
One final problem that I hear about is Lag. You draw a line and a couple of seconds later it appears! I've not had that problem much, (only occasionally), and I think it's probably down to how powerful your computer is. On the good side, it does speed up your workflow (eventually), and it's much more natural drawing with a pen than a mouse. This brief review, (Cintiq 24HD), probably won't make it onto the Wacom website but these are points here that are important to artists and these are the observations of someone who has never used a tablet before.
Posted by Bible artist at 10:42 pm

Can't beat the good old-fashioned brush Graham. That wavy line is terrible. And how much do you have to pay for them to come up with the lame excuses?

I know! If they could sort out the jitter, that would be a massive improvement. And, because you're drawing on glass with a plastic knib, brushlines should be amazing!

Mind you, in all things like this, great programming does away with the need for artistic skill. Ask a digital artist to reproduce his masterpiece on art board with paint and many are stumped!