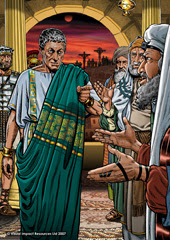 I have just finished the second set of pictures which concludes the story of the crucifixion. Click here for more details!
In picture 7, (sample shown), we see the chief priests who went to complain to Pilate about the inscription that had been written above the cross of Jesus. He replied "What I have written, I have written!"

A good friend of mine who was formally a member of the ultra orthodox group 'chabad' was telling me recently that a truly kosher tefillin can cost in excess of $2,000! There is more fascinating information about phylacteries, and how to wear them here.

I must confess that I have placed the head tefillin, (shel rosh), in the wrong place as the box which contains the scrolls should be worn above the hairline! This information may be helpful to other Bible artists.

In picture 8 we see the soldiers casting lots for the seamless garment of Jesus. There were different ways that lots were cast in Bible times, but most scholars agree that the Romans during this period would probably have used dice very similar to those that we use today. For reference, I found photos of ancient roman dice, (from this period), that were carved from soft stone.

It's worth bearing in mind that the garment that the soldiers were casting lots for would have been dirty, sweaty, and soaked in the blood of Jesus, as it was put back onto Him just after the scourging. Despite this, the garment was still valuable in the eyes of these roman soldiers. Some suggest that the fact that Jesus owned this seamless garment shows that He was very wealthy! I don't believe that the seamless garment speaks of the wealth of the Lord Jesus, but rather His office as High priest. The seamless garment, (woven throughout), was exactly the same type worn by the high priest in the Old testament, made in exactly the same way! The Lord Jesus is the great 'High Priest' after the order of Melchisadec, (Heb 5:6). He will not lay down this office like those of the Aaronic priesthood had to, by way of death, because "He ever liveth, to make intercession for us" (Heb 7:25).

The Lord Jesus can be seen talking to Mary & John from the cross in picture 9. I'm always amazed when I read the words in John 19:26. "When Jesus therefore saw...." Here is Jesus, beaten to near death, and nailed to a cross! Surely now, his ministry of caring was over! Yet we find Him looking down on a crowd, and in that crowd He sees a need! "When Jesus therefore saw His mother..." He then graciously answered that need, "behold your son!" Amazing love!

This is also the point where the Lord says "I thirst", and takes of the soured wine vinegar offered by the soldiers. This was a cheap wine that soldiers and labourers liked to drink. This should not be confused with the wine mingled with gall offered to Jesus before the crucifixion, (Matthew & Mark), which He refused. The wine & gall acted as a pain-killing narcotic, and was offered to those who were about to be crucified to take the edge off the excruciating pain.

In the back-ground of picture 9 you can also see two soldiers fastening a sponge to a branch of hyssop and pouring on the wine from a small flask.

In picture 10 we see the centurion stopping a soldier from breaking the legs of Jesus. As we read in part 1, the breaking of the legs of a crucified victim was a way of speeding up death. There was no need to break the legs of Jesus, as He was already dead.
The Lord Jesus is a type of the Passover lamb. In Exodus 12:46 we read that the pascal lamb was to have none of its bones broken. It is also interesting to note that at the exact time of the crucifixion, (noon, on the day of preparation), thousands of passover lambs were being slaughtered in the temple at Jerusalem.

In picture 11 we see Nicodemus and Joseph of Arimathea who were both respected members of the Sanhedrin asking permission from Pontius Pilate to take down the body of Jesus from the cross. So strong was their love for Jesus that they willingly became ceremonially unclean by their contact with a dead body, (see Numbers 5:1-3, Leviticus 21:1,11). Consequently, they would have been unable to celebrate the Passover Sedar with family and friends the following day.

In picture 12 we see the limp body of Jesus being placed in the tomb.
The first persons to see this picture asked the question "Wouldn't rigor mortis have set in by now?" I had thought about this when I was drawing this scene. The process of rigor mortis begins 2-4 hours after death. The first signs are visible in the jaw and neck of the victim. It then progresses in a head to foot direction, the whole process taking 8-12 hours to complete.
Let's say that it took an hour for Nicodemus and Joseph of Arimathea to ask permission from pilate to take down the body of Jesus from the cross following His death. Then, let's say it took a further hour to take down the body of Jesus and lay it in the nearby tomb. That would mean that the early signs of rigor mortis would only just be showing. So the answer to the question is "No, the body of Jesus would still be limp at this point!"

It was a few hours before sundown when the body of Jesus was buried. You can see that the sun is low in the sky from the angle of the suns rays that are shining into the tomb entrance.

It would be wrong when writing a post about the crucifixion, not to include the Gospel message, so please take the time to read it here!

There are six pictures in this set, which brings our total Bible picture count to 691.
Posted by Bible artist at 1:27 am 5 comments: