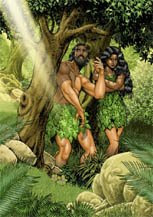 My apologies for not posting for a while. some of you know that my wife Alison, who has had a chronic illness for over 20 years, has been experiencing a severe relapse over the last 3 months. Also our grandson is recovering from the Swine flu, so it's been a tough time. (We would appreciate your prayers).

I am just coming to the end of illustrating Genesis chapter 3, Adam and Eve disobey. There are ten pictures in this set. (Number 4 is pictured above). I'm still looking into how best to depict the Cherubim guarding the Tree of life for the last picture. We have looked in the past, (although very briefly), at how we should depict cherubs in the 'Drawing Cherubs' post, but I would like to do a more detailed post on this soon. I recently came across the only picture that I've ever seen that depicts the two cherubs on the Ark of the Covenant with four wings and four faces as described in Ezekiel chapters 1 and 10. This picture appeared in 'Calmet's Dictionary of the Holy Bible.' This 7,600 page work was first published in Latin in 1707!
Is it unrealistic to want to know what the cherubim actually looked like? Could we ever know for sure? The only way that we can know for sure is when the 'Ark of the Covenant' is recovered, as two 'Divinely inspired' ones are on the Mercy Seat!

I've made sure that Adam and Eve are obscured by lots of plants in this set as this has been a criticism of some of my earlier versions of the Adam and Eve account. I like the cartoon by 'Answers in Genesis' cartoonist Dan Lietha which I'm sure every Bible artist will relate to when depicting Adam and Eve. The caption says:
"Drawing lots of plants is the key for presenting 'pre-fall world' art to a 'post-fall world' audience!" Check out the cartoon here.
'The Bible Eden' illustrated by Scott Hampton is an 'Adult' version of the Adam and Eve account which leaves nothing to the imagination! The fact that this 'graphic' novel was originally produced for Penthouse magazine proves the point that Dan Lietha makes which is that we no longer view nakedness through truly innocent eyes!
If anyone has any further comments to make on the 'Did Adam and Eve have a belly button?' post, now would be a good time to comment! I obscured the belly buttons just in case! ;0)

This set of pictures along with our recently done Children's Bible pictures brings our total Bible picture count to 795. Looking forward to your comments.
Posted by Bible artist at 3:37 pm 49 comments: