I've received some interesting emails recently that I thought I'd share with you.
Philip Hanna contacted me from Kentucky in the U.S. to tell me that his mother, an Armenian lady, now 86 years of age, has a very interesting friend. Philip's mom grew up in Palestine and her close friend Najibe (Nadia) Kattan was the model for Mary (right) in Elsie Anna Wood's Bible illustrations. Philip received a phone call from Najiba only yesterday. She now lives in Los Angeles. Phil said that whenever his mom sees EAW'S pictures of Mary, she can recognize her friend's face from many years ago. Philips parents served for many years as Presbyterian missionaries in Lebanon.

I also received an email a few weeks ago from Linda Martin in Ontario, Canada whose great grandfather was William Hicks. Hicks worked on a farm in Shoreham Kent, and was the model for Moses (left) in Harold Copping's Bible illustrations.
Linda wanted to see Copping's pictures of Moses to see what her great grandfather looked like. As I still don't own a 'Copping Bible', I forwarded her request onto Dr Sandy Brewer.
Sandy Brewer was also contacted a few weeks back by the son of Henry Wickenden. Henry Wickenden was the model for the African boy in Copping's famous painting 'The Hope of the World'. Although Wickenden was not black, he was chosen because of his thick curly hair! 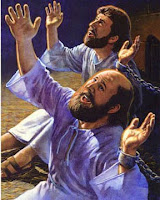 When I last spoke to Bible artist Keith Neely, he had a staggering 21,479 photos which he had taken of models in Bible costume! And that was for the Old Testament alone!
I suggested that when he and his team finish the 7,600 illustrations needed for the Thomas Nelson Illustrated Bible, that he should upload the best of these reference photos onto the web, or maybe bring out a collection of them for sale on dvd! If you would like to see some samples of Keith Neely's Bible figure reference photos, click here. This is one of Keith's Bible illustrations (right) which is in a different style to the one adopted for the T.N.I.B.
Image © Keith Neely 2008

Valerie Neild from London contacted me to ask if any of our readers might have any more information on Bible Artist William Hole? Valerie is a relative of William Hole and would like to find out more about him. If you have any information, please pass it on to me and I will forward it on to Valerie. Many thanks.
Posted by Bible artist at 12:38 am 4 comments: