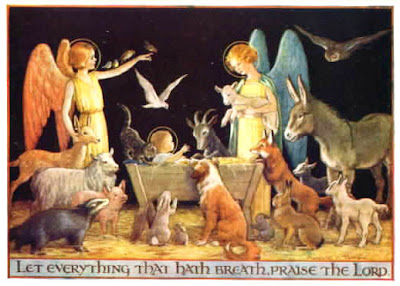 I recently came across the above postcard for sale on Ebay. The illustration is by English Bible artist Margaret Tarrant. Her style is similar to that of Cicely Mary Barker whom she was good friends with. Like Elsie Anna Wood, Tarrant also went to Palestine in the 1930's to sketch and paint the landscape and it's people.

When I first saw this postcard, the animals struck me as being very British!
A fox, badger, cat, dog, pig, rabbits, goats, sparrows and an owl are all animals and birds that are commonly found in the British Isles. most of these animals and birds however, are found in the Bible, or at least have a close relative in the Holy Land. The Lord Jesus speaks of foxes in Matt 8:20, and dogs in Luke 16:21, He also mentions sparrows in Matt 10:29-31. Pigs, deer, owls and goats are all also mentioned in the Bible, as is the rock badger in Psalm 104:18, (although this was probably not the black and white British variety!)

Although cats are not directly mentioned in the Bible, we know that they were common in Egypt, so it's possible that there were some in Israel too, (although they wouldn't have been domesticated). It's been suggested that the reason that cats are not mentioned could be due to the fact that they were considered deities by the Egyptians.
There were no rabbits either, but there were two species of hare to be found in Syria, and one of these is very like the English variety.

We do tend to include in our pictures just the animals and birds that we readily associate with the Holy Land such as Camels, sheep, oxen, donkeys and doves. Maybe we should be a little more adventurous and, like Tarrant, add the odd fox or maybe even a cat into our Bible pictures! What do you think? If you're feeling adventurous, there's a helpful list of all the animals found in the Bible here.

Related posts:
What do ewe think?
Posted by Bible artist at 12:26 am 12 comments: