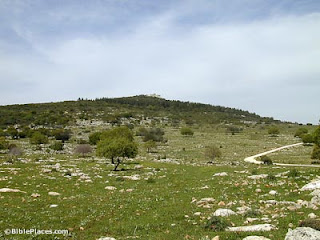 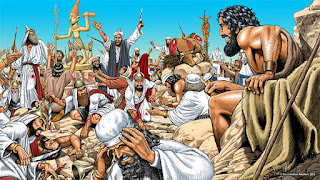 Picture 1 shows Elijah confronting Ahab. Picture 2 depicts Elijah explaining the contest to the people. Picture 3, (right), shows Elijah mocking the prophets of Baal and Asherah. The prophets are cutting themselves with swords and spears as was the custom. There is a stone image of Baal and an Asherah pole in the background. Picture 4 shows the people emptying 12 jars of water over the sacrificial bull on the altar set up by Elijah. The water is pouring down the stones and into the trench around the altar, mixing with the blood of the bull. Picture 5 depicts Elijah praying. Those in the background look heavenward in anticipation. Picture 6 shows God answering Elijah's prayer with fire! The fire consumes the sacrifice, wood, stone altar and even the soil! I've shown a lot of steam as the fire licks up the water in the trench. The people are falling down in wonder crying out "The Lord - He is God! The Lord - He is God!"
This Bible picture set, along with many others, is available from foundationmatters.org Photo © Bibleplaces.com 2015
Posted by Bible artist at 5:05 pm 14 comments: