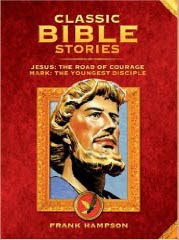 When I first wrote about the Bible art of Frank Hampson I received emails from a number of people all asking if I knew where they could obtain a copy of 'Jesus: The Road of Courage' from. My answer was always the same, "Sorry, copies are very hard to find." That was the case up until now!
A few weeks ago, John Freeman, who works for Titan books, left a blog comment on the Frank Hampson post informing readers that, at the end of this month (March), Titan books will be releasing 'Classic Bible Stories' which combines both 'Jesus: The Road of Courage' and 'Mark: The youngest Disciple'. John says that "Both strips have been scanned from good quality issues of Eagle.......the collection will also include Hampson's beautiful Nativity illustration from the 1957 Eagle Annual".

(Before you rush to order a copy, you might want to read the Update/Review below). I haven't seen any of the artwork from 'Mark: The youngest Disciple' as yet, or Hampson's Nativity art, so I'm really looking forward to seeing this new book.
For me, the visual interpretation of Jesus, (see cover) is my only complaint. Some of Hampson's character designs look very 'British' and his interpretation of Jesus would perhaps fit better in a 'Robin Hood' graphic novel than in one based on the New Testament. Having said that, most of his other character designs are superb!
if it's dynamic, lavishly illustrated Bible artwork you're looking for, it doesn't get better than this! Does anyone know if Hampson illustrated any of the Old Testament stories for Eagle comic?

Update/Review:12 March 2010
Just received my copy of 'Classic Bible stories' and I have to say I'm disappointed. I need to quickly clear up a couple of misleading comments in the post above. Firstly, I was led to believe, by John Freemans's post comment, that there was additional Frank Hampson artwork, based on the Nativity, that had been included in this book. There isn't! The 'Road of courage' already includes the Nativity story, which I should have realized!
Secondly, you will notice on the book cover above, which appears on Amazon, the name 'Frank Hampson'. Well, that name doesn't appear on the cover of the actual book, and there's a good reason why it doesn't. The story of 'Mark: The youngest disciple' isn't illustrated by Hampson! It's illustrated by Giorgio Bellavitis. While Bellavitis' work is pleasant, it's not in the same league as Hampson's. So, if you're a Hampson fan, and you already own a copy of 'The Road of Courage' and you were hoping to find some new Hampson Bible Art in this book, (as I was), you will be disappointed.

That wasn't what disappointed me most about the book though. The worst thing about this book is the print quality. My copy of 'The Road of Courage' published by 'Dragon's Dream' was printed 29 years ago in the Netherlands and it's superb! All Hampson's fine line work and his subtle color work is all there to be admired. In this new version however, the fine black line work has filled in to a solid black and the subtle colors are harsh or bleached out! I'm not sure if it's the scanning or the printing, or both, that's at fault, but whoever O.K.'d the printing proofs was not a Hampson fan! I would certainly not have passed them!
The question remains, "If you don't already own a copy of 'The Road of Courage', should you buy this one?" I hate to say no but, If you really want to appreciate Hampson's Bible art, then you need to see an earlier version! If this book was produced for fans of Hampson's art, or the Eagle comic, no expense should have been spared when reproducing the original art.
Posted by Bible artist at 3:24 pm 15 comments: