David and Goliath, and Philistine Armor 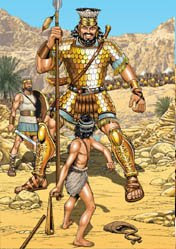 To some, the idea of one champion fighting on behalf of an entire army is fanciful, whereas this was the common practice of the Philistines in deciding the outcome of a battle. To the Philistines, a battle of champions represented the will of the gods! If their champion won, then the gods were on their side and they could expect victory over their enemy.
The 'Battle of Champions' was characteristic of Aegean peoples and this form of battle was known almost exclusively from the Greek Epic tradition. This form of battle however was unheard of among the Israelites which might explain their difficulty in selecting a champion of their own. The fact that this battle, in the minds of the Philistines, was a battle of the immortals would explain why the Philistines fled following Goliath's defeat!
Goliath was indeed a formidable and intimidating champion chosen no doubt for his size, (nine foot and three inches), which some attribute to the possibility that he was a descendant of the Anakim. When Joshua expelled the giant Anakim people from the land of Canaan a few found refuge in the city of Gath where Goliath originated from.

Some also try to discredit this biblical account by saying that, according to the Egyptian reliefs in the tomb of Ramesses III, (shown below), the Philistines wore no coats of mail or greaves and so the biblical narrative is incorrect! They forget that these ancient carvings are depicting the 'captured' Philistine army which had been deprived of all weaponry and armor as was the practice inflicted on a defeated enemy. The Israelites not only took Goliath's weapons and armor, they weighed them too! 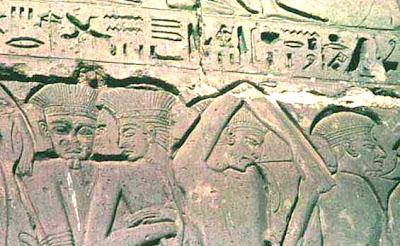 Nate Butler asked the question why do so many Bible artists illustrate Goliath's helmet incorrectly when there is so much archeological reference available that clearly displays it? That's a good question, and it's true, we do have a very good idea of what the Philistine helmets looked like from the ancient Egyptian reliefs at Medinet Habu. But, it's also true that Goliath was equipped like no other Philistine foot soldier, and it does appear, from the biblical text, that he used a sampling of weapons from different parts of the ancient Middle East. There is a very good reason for this which we will look at shortly.

Goliath's Helmet
The Egyptian reliefs found at Medinet Habu (see above) clearly show the distinctive feathered helmets which were unique to the Philistine army. The helmets appear to be secured under the chin by leather straps. Feathers were held in place by a decorative metal band. Interestingly, the Philistines are shown to be clean-shaven! When I tried illustrating Goliath above without a beard, it just wasn't Goliath! This is one of those occasions when, as Paul G says, we need to play to the expectations of others! Because we use the word 'Philistine' to describe someone who is uncultured, we tend to think of Philistines as bearded barbarians but, as we will see shortly, this might be far from the truth!

Goliath's Shield and Sword
These reliefs also show the captured small circular shields used by the Philistine foot soldiers. Goliath's shield was no doubt larger than most, and was borne by a shield bearer who traditionally walked in front of the warrior up until the battle. Goliath's sword is interesting too. Experts claim that the sword described in the Bible, and worn on the back, was a curved blade Sickle sword and not the straight sword normally used by the Philistines. The sickle sword was first used by the Canaanites and, because of its brutal effectiveness, was later adopted by the Egyptians. So, why did Goliath own such a sword? It makes sense that a warrior like Goliath who had no doubt fought one to one battles on many occasions previous to this, would have collected trophies of these victories. Perhaps the sickle sword was one of these trophies.
By displaying an array of captured weaponry Goliath was also displaying his superiority over all opposing forces. They declared Goliath's invincibility! Perhaps this was a tactic intended to intimidate his enemies even before the battle began!

Goliath's Scale Armor and Greaves
Scale armor was important because it protected a soldier without restricting his movements. It was first used in the Aegean.
Each bronze scale was attached in rows to a leather apron. Each overlapping row was offset giving the appearance of fish scales.
The Bible clearly states that Goliath wore "greaves of brass upon his legs". Again some have criticised the biblical account here by claiming that the Philistines did not wear greaves. But, in a recent article in the 'Biblical Archeological Review' which discusses the recent find in Ashkelon of some greek-style pottery, Dr Stager said "Throwing caution to the wind, I am willing to state flatly that the Sea Peoples, including the Philistines, were Mycenaean Greeks." Dr Stager went on to say " because the Bible describes Goliath as going into the battle wearing bronze greaves on his legs. No Canaanite or Israelite soldier wore greaves, but Greek warriors did." So this would explain Goliath's bronze greaves. Maybe the Philistines were not a barbaric uncultured people after all. They may well have been descendants of the more elevated Greeks!

Goliath's Spear
Goliath's iron headed spear has been the subject of much speculation. Some believe that it was more likely to be a javelin than a spear. There are two theories that speculate why the Bible likens Goliath's spear to a weaver's beam. The popular opinion is that this statement refers to the spears size and weight. The second opinion states that the Aegean javelin had a cord wound around the shaft held by loops which gave the spear greater stability in flight. Apparently this winding cord and loop arrangement gave Goliath's spear the appearance of a weaver's heddle rod, characteristic of those used for hand loom weaving in Israel.
I look forward to your comments.
Posted by Bible artist at 9:53 pm 51 comments: