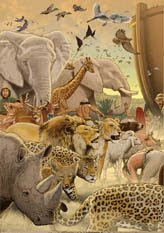 The picture set of Noah's Ark is finished. There are 17 pictures in this set which is why it's taken so long to complete! I am indebted to all the model makers, (who I link to in the 'Bible Models' link list), who have spent many hours building replica models of Noah's Ark. I have used both interior and exterior photos of these excellent models for reference.

I have tried to include scenes from the Biblical account of Noah that you don't normally see illustrated in children's Bibles such as the arrival of the animals in picture 4, (above). It was suggested in one article that I read that, during the 100 or so years that it took Noah to build the Ark, that Noah purchased all the animals from passing merchants. But, Gen 6:20 does suggest that the arrival of the animals was a divinely orchestrated event. I wanted to try to capture the fear and awe of those who witnessed the arrival of this 'Supernatural Tsunami' of animals as they silently approached the ark. My inspiration for this picture came from the wonderful painting below titled 'Noah's Ark' © Haruo Takino.

Picture 5 shows the animals entering the ark. included in this picture is a flock of sheep. This is to point out that only the unclean animals went into the ark in pairs. The clean animals, (and birds), such as sheep, oxen, quail etc which were used for sacrifice, breeding and food, entered the ark in sevens. Rapid multiplication of these breeds was of the highest importance! Some commentators suggest that there were six for breeding and one for the sacrifice to God, which took place in Gen 8:20. Some translations say that every type of clean animal went into the ark in pairs of seven, (14 of each). Maybe our readers who are fluent in Hebrew can shed some light on this one?
Also in this picture we see that the ark is covered in pitch. For some reason, we rarely see depictions of Noah's ark covered with pitch. We mentioned in the 'Baby in a Basket' post that the basket which held baby Moses is also rarely shown to be covered in pitch. I think that the reasons for this might be the same; It just doesn't look nice! This is probably the reason why model makers never cover their models of Noah's ark with pitch. In picture 6, which is an interior view showing the door of the ark being shut by God, we can see all the animal hoof and paw prints in the pitch that overlaps into the doorway of the ark.

In picture 3, (right), we see the arks interior as Noah's sons and daughter-in-laws load the supplies. The early narrow bottomed jars that would not stand in a swaying boat are hanging by ropes along with the oil lamps and the ingenious ceramic water feeders believed to have originated from this period.

In picture two, Noah is preaching. It may be a surprise to some readers to find out that both the preaching by Noah, (that we have often heard about in Sunday school), and the subsequent rejection of his message by the jeering crowd, is not recorded in the Old Testament! We only know that Noah was a 'preacher of righteousness' from 2 Peter 2:5. If we were being faithful to the Old Testament account, we would not include a picture of Noah preaching to a jeering mob! I came across a website where this was the subject of discussion. This discussion does have a bearing on how we should illustrate this story. Do we show Noah preaching at all? Did Noah only preach before or during the arks construction?

One person suggested that Noah stopped preaching at the point where God told him to build the ark. The reason given was "If you read Genesis chapter 6 carefully, you'll see that 3 times God says he is going to destroy man, plus the rest of creation (verses 7, 13 & 17). In other words, He had already passed judgement so it was now too late for any one else to repent. Then in v18, He tells Noah about the covenant He is going to establish but it's only for him and his immediate family". It is hard to imagine though, that there were not those who questioned Noah during the building of the ark as to why he was building it, and even harder to imagine that Noah, who was a preacher of righteousness, was not compelled to give them an answer, (or in effect preach!) Whatever our thoughts are on Election or Predestination, the preaching does not stop. Also, experts on the ark tell us that the ark was not full to capacity, so there was still room.

During this discussion someone else commented ...according to Hebrews 11:7, Noah built the ark for his family, not for the whole world. Yes, he condemned the world, and he did preach (2Pet 2:5). But his preaching was not to get into the ark. IF THEY HAD REPENTED, THEN GOD WOULD NOT HAVE HAD TO DESTROY THEM. Remember Nineveh was spared when repented?"
The problem with this argument is that Peter mentions the ark, (in 2 Peter 2:5), when speaking about the certainty of God's judgement. Unlike Ninevah, God's judgement was certain, and the ark was the only way of escape! This is why we believe that Noah's Ark is a type of Christ. Just as in Noah's day, the only way to escape God's certain judgement (the flood) was to enter through the only door into the ark, the only way that we can escape from the certain coming judgement of God on our sin and rebellion against Him is to turn away from our sins (repent), and enter into Christ, which we do by faith in Him as the 'Perfect Lamb' sacrificed for the sins of the world. (John 3:16). Jesus said "I am the door. by me if any man enter in, he shall be saved" (John 10:9).

This set brings our total Bible picture count to 812! (All of our more recent Bible picture sets will be available soon at the Bible Picture website).
As always, your comments are welcome!
Posted by Bible artist at 10:04 am 11 comments: