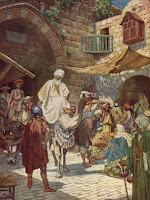 I've been wanting to add William Hole R.S.A. to my 'favorite Bible artists' list for some time, as It was his 'artists notes' that accompanied his Bible pictures in the book 'The Life of Jesus of Nazareth' that provided the inspiration for me to set up the 'Bible illustration blog.'

William Hole was the only child of Richard and Anne Hole, born in Salisbury in 1846. His father was a doctor, and the family soon relocated to Edinburgh where William received his education at the Edinburgh Academy. Hole served as an apprentice to a civil engineers in the city before deciding, in his early twenties, that he wanted to see more of the world. While traveling through Italy he befriended some artists in Rome who convinced him that he should pursue a career in art. On returning to Edinburgh he began formal training in both painting and etching at the Royal Scottish Academy (RSA).
Hole specialized in the painting of historical and Industrial subjects as well as landscapes, and around 1900 he traveled to the Holy land to begin work on the 80 watercolors that would appear in 'The Life of Jesus of Nazareth.'

Hole's Biblical costumes
There is no doubt, as can be seen from his artists notes, that Hole sought to capture historical accuracy in his Bible pictures, and to this end, with the help of David Whiting (an expert collector of Palestinian village costume), he purchased a collection of traditional Palestinian costumes to use for reference in his paintings. Artist William Holman-Hunt, one of the founders of the Pre-Raphaelite Brotherhood, also had a large collection of Palestinian costumes that he used for reference in his Bible pictures. This picture which represents Mary and Martha with Jesus shows the women dressed in traditional 19th century Bethlehem costumes. A feature of traditional women's Palestinian clothing are the ornate panels of intricate embroidery which were attached to the front of the dress. As these panels involved a lot of work they were detachable, and could be moved from dress to dress as the girl grew.

Hole's Biblical architecture
All Hole's paintings were done 'on the spot' and although his desire was to capture authenticity in his pictures, he still relied heavily on the existing buildings around him for reference which resulted in the painting of many Byzantine architectural features that were not found in Biblical times. You will notice for instance in the painting (top right) the wooden window box feature. These appear a lot in Hole's Bible paintings Dr Leen Ritmeyer informs me that these wooden window boxes "date from the medieval period. They were never used in Biblical times. Same with the dome which appears in the top picture".
I've already mentioned in an earlier post about Hole's use of Byzantine embellishments, similar to those found on the 'Dome on the Rock' on his depiction of Herod's Temple. Having said this though, very few Bible artists put in as much study and detail into their buildings as Hole did.

Hole's depiction of Jesus
Hole's depiction of Jesus is like no other! In fact, if you were unfamiliar with Hole's Bible paintings, you would be hard pressed to actually pick out Jesus in a crowd! The reason for this is that Hole paints Jesus wearing a 'keffiyeh' the traditional Arab headdress for men. Hole's figure work, although not as strong as Harold Copping's, is still very helpful for reference.

Hole's Legacy
Anyone who has visited the Holy Land, on seeing Hole's paintings, always comment that he has managed to capture the very atmosphere of the land. Both his use of light, and the colors used in his landscapes make Hole's Bible pictures truly memorable. It was no doubt his method of painting 'on the spot' that helped him to capture these essential ingredients in his pictures.
Hole's book 'The Life of Jesus of Nazareth' comes up regularly on Ebay and includes very helpful 'Introductory notes' by Dr George Adam Smith, Professor of Old Testament Theology, a very lengthy 'Preface' by William Sinclair, Archdeacon on London, and of course the artists own notes on each picture.
If you are interested in the pictures alone, there's a publisher here that has plans to reprint all eighty of Hole's Bible pictures.