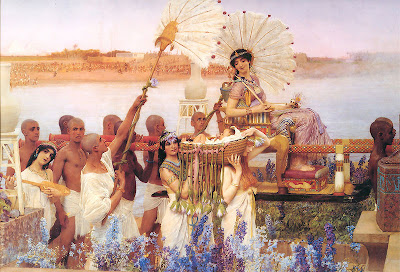 Sir Lawrence Alma-Tadema 1836-1912
I recently came across some amazing Bible paintings by Dutch born Victorian artist Sir Lawrence Alma-Tadema. Although Alma-Tedema is best known for recreating historical scenes from ancient Rome, Greece and Egypt, he also painted a small number of pictures depicting scenes from the Bible like the one above titled 'The Finding of Moses'. Alma-Tadema is famous for his almost photographic portrayal of ancient artifacts and architecture. The accuracy and detail contained in his pictures is breathtaking! A good example is Phidias Showing the Frieze of the Parthenon to his Friends.

So detailed are Alma-Tadema's pictures that he is credited in the book 'Great Painters and their Famous Bible Pictures' for having "peopled the past, rebuilt its towns, refurnished its houses and rekindled the flame upon the sacrificial alters".
It was during his first visit to Italy in 1863 that his mission in life became clear to him. He began his painstaking study "to bring antiquity back to life in so far as it lay in the power of his art". Muther said of him "There was no monument of brass or marble, no wall painting, no pictured vase or mosaic, no sample of ancient arts, of pottery, stone-cutting, or work in gold, that he did not study".

When painting scenes in Egypt he made many trips to the British Museum in London where he made sketches of the ancient artifacts on display. The picture above 'The Finding of Moses" took Alma-Tadema two years to paint and includes a number of archaeologically precise objects and inscriptions. His infatuation with detail brought some criticism though. Some critics said that his pictures "lacked sentiment" or "possessed no heart-interest". Others said that his work was becoming too encyclopedic.
Alma-Tadema's passion for antiquities did not confine itself to his paintings. His house in London was also filled with Egyptian decorations, pillars, mosaic floors, tiger skins and oriental carpets. His garden also was in the classical Roman style filled with marble benches and basins and statues of bronze and stone.

Alma-Tadems's paintings have served to inspire film makers of both the past and present. Cecil B. DeMille when filming The Ten Commandments had a set of Alma-Tadema's prints for the set designers to study. More recently the set designers of the Oscar-winning film 'Gladiator' took their inspiration from the very same pictures.
Alma-Tadema was knighted and received an Order of Merit, and, although his paintings were publicly acclaimed during his lifetime, following his death in 1912, they fell out of favor. During this time some of his paintings could have been purchased for as little as £20. Things changed though in the late 1960s when there was a revival of interest in Victorian paintings.
When the picture above 'The Finding of Moses' was auctioned at Christies in New York in May 1995, it sold for £1.75 million!

Links to some of Sir Lawrence Alma-Tadema's Bible Art:
Joseph - Overseer of the Pharoah's Granaries
The Death of the First Born
An Audience at Agrippa's
More pictures of historical interest to the Bible Artist:
Sculptors in Ancient Rome
Egyptian Chess Players
Egyptian Juggler 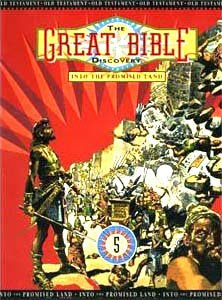 Thanks to Stefan Koelewijn from the Netherlands I now have the full 24 volume set of 'The Great Bible Discovery' series first published in France in 1983 as 'Déccouvrir la Bible'. This series of books contains some superb Bible art by some of the well known European comic strip artists such as Paolo Eleuteri Serpieri, Pierre Frisano, Carlo Marcello, Raymond Poïvet and many more.

If you are interested in any or all of the numbers above, email me and I will forward on your email to Stefan. Good luck!

Further Update: 26.09.09
Stefan has just emailed me. He in willing to sell individual copies now for the bulk price of €5 each! I wish that I had met him earlier! Email Stefan to see which copies he still has available!
Further Update: 26.11.09
A lucky reader of the blog in Singapore has just snapped up all Stefan's copies of the Great Bible Discovery!

Related posts:
The Great Bible Discovery
Posted by Bible artist at 12:50 am 9 comments: