Pictures of the Passover 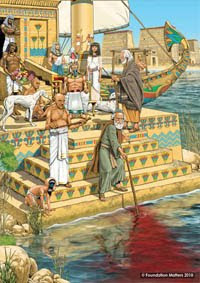 I have finished the pictures for the Passover story at last! There are 18 pictures in this set which has taken months to complete due to all the detailed Egyptian settings and the sheer amount of people (and insects) involved in the story. The pictures retell the story beginning from when Moses and Aaron first came before Pharaoh, and ending when the Egyptian army is destroyed in the Red Sea.

They are confident of his age at death, because the ancient source known as the Sphinx Stele declares that he was 18 years of age when he ascended the throne. There is no reason to doubt this. Redford, Der Manuelian and other Egyptologists argue convincingly that his coregency with his father lasted 2 1/3 years, which I have documented in my article.

Since the dating of Amenhotep II's reign begins at the inception of his coregency, thus when he was 18 years old, and his reign was numbered without interruption through the coregency and into his sole reign, we know that he would have been approximately 26 years old during his Regnal Year 9, the year of the exodus, with a variance of only 1 year possible. Of this we can be very confident."

Regarding the age of Amenhotep's firstborn son Dr Petrovich says....
"As for the age of his firstborn son at this time, Thutmose, unfortunately I have virtually no confidence. I wish we could know more. The chance always exists that a new discovery WILL answer this for us, but only time will tell.

What we can be sure about is how old he was not. Given that his father was 26 (or so) when he died, this son could not have been more than 9 years old or so. Most likely, his father would have wed between 18 and 22 years of age, so Thutmose most likely was 3 to 7 years of age--at the oldest--at the time of his death; perhaps "5" would be our most logical supposition. Obviously, he may have been less than a year old, so this cannot be ruled out. What we can rule out is the chance that he was an adolescent or young adult."

We have a fairly good idea of what Amenhotep II looked like. There are a number of stone sculptures, monuments and tomb paintings which record both his physical features and his accomplishments as a hunter, archer and charioteer. He is often shown wearing a nemes headcloth which features a prominent uraeus, (upright spitting cobra), on the front. The body of the cobra undulates up and over the top of the headcloth. In picture 1 we see Moses and Aaron before pharaoh. Aaron's rod has become a serpent and is swallowing the snakes conjured up by the Egyptian magicians. This spectacle is being watched with interest by Amenhotep's hunting dogs! These dogs, which are thought to have been either greyhounds or Ibizan hounds, appeared with Amenhotep II on wall paintings and were not only regarded as hunting dogs - they were highly regarded pets of the ancient Egyptians and were often mummified and buried with their owners.
On the subject of hunting there is also evidence from tomb paintings that tame cheetah's were used by the huntsmen also.

Picture 2 (above) depicts the first plague as the Nile, which itself was considered a deity by the Egyptians, is turned to blood. The dogs appear again in this picture as does Thutmose who I portray as being 5-6 years old as per Dr Petrovich's comments above. Picture 3 shows the plague of frogs. Egyptian handmaidens are rooted to the spot screaming as frogs leap around their feet. The frogs show no regard for the Egyptian deities as they clamber over the image of the Egyptian god Anubis! picture 4 depicts the plague of gnats. Thutmose is shown standing on his fathers throne using his father's giraffe tail fly swatter to battle the insects. This is the only time he will ascend to his father's throne which is the reason why a number never appears after his name. Thutmose III was the father of Amenhotep II. He was Egypt's most-powerful, imperialistic pharaoh. He would have been pharaoh when Moses left Egypt to go to Midian.

Picture 5 illustrates the plague of flies. On special occasions the egyptian women wore cones made of animal fat on top of their heads. These cones of fat were scented with spices and herbs and as the fat melted the hair became perfumed and greasy! The cones were often worn pierced through with a flower. The flies in this picture are particularly interested in these scented domes to the horror of the wearers! Picture 6 depicts the plague which killed the Egyptians livestock, and picture 7 shows the plague of boils. Picture 8 depicts the plague of hail stones and lightning and I show both the crops of flax and barley being destroyed. Picture 9 shows the plague of locusts and picture 10 shows the approaching plague of darkness. I've tried to show this darkness approaching in full day light to illustrate its all consuming nature. I don't believe that this darkness could be compared to night time - the Bible describes it as a darkness that could be felt! It also sounds like this darkness couldn't be dispelled by interior lamps either. It's interesting that this darkness comes just before the death of the Passover lamb because the next time we see an inky blackness to compare with this is just before the sacrifice of the Lamb of God on the cross. Young Thutmose is holding a toy horse which is based on an actual ancient Egyptian toy from this period. 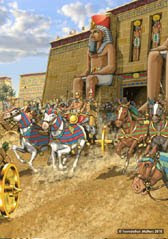 Picture 11 shows the family preparing the Passover lamb which can be seen lying on the table in the background. The father of the house is applying the blood to the door lintel and posts as the mother prepares to roast the lamb. The daughter is standing outside holding a bunch of hyssop for her dad. modern Bible scholars still express uncertainty about the actual identity of the hyssop plant mentioned here, but as it was used on this occasion almost like a paintbrush, and in the levitical purification rituals for sprinkling, it does suggest that the plant was able to hold moisture. For this reason some have suggested that the plant Origanum syriacum, (Syrian hyssop) seems the most likely candidate. This is the one I decided to use in the picture.
The little girl is not happy as the lamb whom she had cared for during the last four days has been slain. (Ex 12:3-7) The mother too is holding back the tears and is being comforted by her little son. This is a reminder of the awful consequences of sin and the necessity of a blood sacrifice. Without the shedding of blood there is no remission of sin. Hebrews 9:22

Picture 12 shows the death of the firstborn. It's not long past midnight and the lifeless body of Thutmose lies in the lap of his mother. Moses and Aaron have been told to take the Israelites and leave Egypt. Various bottles of lotions and potions are scattered around the floor that were used in a vain attempt to revive the young boy. Picture 13 shows the children of Israel nearing the end of their 25 mile journey from Rameses to Succoth. This journey began in the night and would have taken around 5 hours. The sun is just starting to rise over the sea of Israelites who by conservative estimates were around 2 million in number! Moses is leading them and he is surrounded by excited children. One boy to the right of Moses is carrying a kneading trough which holds a lump of unleavened dough partly covered by a damp cloth. The girl to the left of Moses is the same girl from picture 11. She's not sad anymore though. she's wearing a beautiful golden Egyptian necklace which is part of the bounty of Gold, silver and clothing given to the children of Israel by the Egyptians. She is walking along pretending to be an Egyptian princess with a bulrush head in her hand. The death and shed blood of her little lamb which she mourned so deeply for has both secured her freedom from captivity and provided her with a new garment to wear also! These are all significant illustrations of the Gospel.

Picture 14 (above left) shows the Egyptian chariots pouring forth from Egypt in hot pursuit of the Israelites! Incidentally, the wheels of Egyptian chariots had six spokes, not four as is sometimes suggested. Picture 15 depicts the parting of the Red Sea which we've talked about in more detail here. Picture 16 shows the nation of Israel passing through the sea on dry land. The scene is flooded with light from the pillar of fire and cloud. As the people pass through the deepest part of the sea some of them have lit torches. In the far distance you can just make out the crowds coming up onto the opposite shore bathed in moonlight. Picture 17 shows the Egyptian chariots charging into the divided waters. Pharaoh's chariot however is perched on a rock overlooking the scene as Amenhotep II later returned to Egypt, without his army, to reign for a few more years. The chariots are being driven into a dense black cloud and chariot wheels are starting to break off. The pillar of dark cloud which is holding back the Egyptians is struggling to conceal the brilliance of the Shekinah fire on the opposite side which is providing light to the Israelites. Towards the top of the pillar shafts of blinding light are piercing through the cloud like volcanic lightning! Just behind the pillar of cloud you can see that the opposite shore is lit by the Shekinah fire.

The final picture shows the water crashing down onto the Egyptian chariots! As soon as this set is uploaded to the Bible picture website
I will add a link so that you can view all the pictures.
© G D Kennedy 2010
Posted by Bible artist at 11:55 am 8 comments: