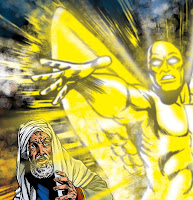 I was asked just before Christmas, if I could draw a large angel for our church youth group, as they were performing a nativity play.
I always feel a little uneasy when drawing angels, mainly because, I'm not too sure what they look like! For the same reason, I also feel uncomfortable drawing anything relating to heaven. I hold to the view that these things are beyond human imagination, therefore, however we try to depict them, we are sure to fail miserably!

Man boasts that he can achieve whatever he can imagine, but God begins where mans imagination ends! There are many instances in the Bible where man, after seeing a heavenly vision, attempts to describe the indescribable! e.g. Isaiah 6, Ezekiel 10, Revelation etc. In Corinthians ch12:2, Paul 'beheld sights and heard unspeakable words which it would not be possible for man to declare'. In the same way that 'words failed' Paul, if the worlds greatest artist were to see those same visions, I believe that he too, would be unable to paint them onto canvas.

The Bible mentions different types of angelic beings, such as 'Cherubim', 'Seraphim', 'Thrones', 'Archangels', 'Angels', 'Principalities and powers. etc. The descriptions given, of both the cherubim in Ezekiel 10, and the seraphim in Isaiah 6:2, fall into the category of the indescribable! There are descriptions given, but they're not easily translated into coherent images.

The craftsmen of Moses' day however, didn't seem to have any problems depicting cherubs. They made two cherubim in solid gold for the 'Ark of the Covenant'. Presumably, Moses was given the visual information about cherubs, which he in turn passed on to the craftsmen. We also read in Ex 26:1 that skilled craftsmen wove images of cherubim into the design of the tabernacle curtain. According to Ezekiel, cherubs have four wings. I've only ever seen two winged cherubs on reconstructed models of the 'Ark of the Covenant'.
The word 'Seraphim' means 'burning ones' which suggests that they have the appearance of fire.
Adolphe Napoleon Didron, (1886), illustrated both cherubim and seraphim based on the literal descriptions given in Isaiah 6 and Ezekiel 10. The end results however, were most unusual.

So, going back to angels. How should we draw them? What do they really look like? Most of the 'Angel imagery' that is accepted, is provided by the 'Old masters'. If we are to base our pictures on these images alone, then angels will remain as either 'fat babies with wings', or slightly effeminate looking men with long white robes, wings, and in some cases, a sword. So, how scriptural are these images?

Firstly, it's important to mention that, out of the list of angelic beings mentioned above, it's angels that interact with men, and they appear in human form. Notice also, that angels always appear in adult form, (not as fat babies!)
Most of the time they are male, although female ones seem to be mentioned in Zechariah 5:9.
In most Bible passages about angels, Wings are not mentioned! In Genesis chapters 18 & 19 for instance, the angels had no wings. At least not visible ones.
Seraphim, cherubim and thrones however, do have wings , but Seraphs only use two of their six wings to fly!
Angels are recorded as wearing white robes, which in some cases radiate dazzling light. (Matt 28:3), but, angels also appear in normal clothing, (Gen:18).
If Pauls comments about 'entertaining angels unawares' in Hebrews 13:1-2, is applicable today, then it would suggest that angels keep up-to-date with fashion too!
It seems that angels either appear as men, (so as not to cause alarm), or in their natural state, which is both awesome and terrifying. (Luke 24:5).
In Psalm 78:25, angels food is mentioned which suggests that angels may also eat!

If anyone has done a study of angels, (from the Bible), and would like to share their thoughts, particularly on the physical appearance of angels, please leave a comment.

The fact Paul says we could entertain Angels unawares indicates they should be illustrated as being human in many instances. Billy Graham wrote a book that talked about angels posing as humans. Entertaining the thought that the stranger you are talking with could in fact be an angel also helps promote compassion and empathy in our relationships.

The few things I know that can be added here is that the artists of the tabernacle were divinely inspired. (I can't recall where it stands, but it's there. The Lord inspired them directly)

And then that the female angles of Zechariah seem to not be on the good side as they were "To build it an house in the land of Shinar: and it shall be established, and set there upon her own base." (5:11)
But I'm not sure wether or not that indicated the nature of the angels.

I think your angels are great.

I actually came to your site looking for a good picture of an angel. Thanks!

Joshua trembled before the Angel of God -- warrior of heaven. God is at times called Yahweh Sabboth -- The God of the armies of heaven. Not weak wimps, or babies, but the mighty warriors of the Almighty.

Absolutely right David!
I think that I might have been influenced by the 'Silver Surfer' in this representation!!

I was illustrating the Cherubim in the Garden of Eden recently and I used the description in Ezekiel. These are awesome creatures too, not fat babies with wings!

Does anyone know where I can find accurately depicted angels?

I have found very few. Those include Lisa Hutchinson's "Shelter of Wings"(there are two pages that show supernatural beings with ethereal appearance), Anthony Carpenter's "Bible Angels vs. Demons"(although, he seems to forget what angels look like when he illustrates Archangels and Warrior Angels), an illustration by Artist Xero(note: his angel does have wings, sadly), and a few samples from Graham D. Kennedy.

As Paul mentioned above, Angels often appear as men.
I did attempt to draw cherubim based on the description in Ezekiel which you can see in the set of pictures illustrating the fall:
http://www.foundationmatters.org/store/ot-books-of-the-law/adam-and-eve-disobey.html
but I would not be as bold as to say that it's an accurate depiction.

i think thats is nice picture.
The mans look like a person in te super 4 superhero :)

Does this blog get updated anymore?