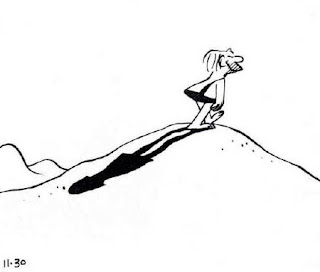 Just heard today that the brilliant Christian cartoonist Johnny Hart went home to be with his Lord on Saturday. He was 76. He died of a stroke at his home in Endicott, U.S.
A sad loss for his family, friends and fans worldwide.
The fact that he died the day before Easter Sunday, when the world remembers the 'Resurrection of the Lord', must have been a comforting reminder to the family that death is not the end!

My brother and I were brought up on 'The Wizard of Id' strip in the 70's, which he co-created with fellow cartoonist Brant Parker. They were the funniest strips!
I was thrilled to hear that he had become a christian and was involved in the kids work in his church. I'm sure he was a great blessing to them. The kids will miss him.

Hart was best known for his cartoon strip 'B.C', which was launched back in 1958. (the year I was born!)
When he became a Christian he started to introduce Christian themes into the strip which led to much criticism, but what cartoonist worth his salt doesn't have critics? From what I've read about the man, Hart was a good name for him.
He will be missed by all his fans here in the U.K.

Christian artists never stop creating. They just get a bigger palette with more colors!
Posted by Bible artist at 1:18 pm

You'll be interested to know "Wizard of Id" co-creator Brant Parker died, aged 86, eight days after Johnny Hart's death. He lived a few miles from me in Lynchburg, Virginia.

Gosh! Another sad loss, and within eight days of each other!
Johnny and Brant were an unbeatable team.

Nothing made me laugh like the 'Wizard of Id'.
Thanks for the info Paul.

A graphic novel is a serious story told in comics form.

Synopsis: the true story of a wealthy Sikh in post-Victorian India who becomes a penniless follower of Jesus Christ. Genuine signs and wonders follow this man of God as he brings the Gospel into then-forbidden Tibet and surrounding regions, often imperiling his own life. A riveting and unforgettable testimony.

Thanks for letting us know!
Sounds interesting.