I've just been working on illustrations for the Bible story of 12 year old Jesus' visit to the Temple with Mary & Joseph for the feast of the Passover, (Luke 2:42). This is one of a number of New Testament stories that takes place in Herod's Temple complex. Because the Temple appears in so many stories, it's important that Bible artists have some idea of what it looked like. The Temple took a staggering 43-46 years to build, although it was never fully completed in accordance with the original design. The Temple was built in the classical Roman style. The reason it's called Herod's Temple is because it was 'Herod the Great' who, in an attempt to gain the favor of his Jewish subjects, ordered the rebuilding of the Temple on a much grander scale. The Temple was almost completely destroyed in A.D. 70, (which Jesus prophesied in Matthew 24:1-2).

We see little evidence in Bible pictures of construction work taking place on the Temple despite the fact that during the whole life of Jesus the Temple was under construction! Bible artist William Hole didn't miss this fact, as in at least two of his paintings you can see construction workers in the background working on the Temple! Hole is one of the few artists who showed the Temple in great detail. His picture (left) shows the 15 semicircular steps that led from the 'Court of the Women', through the 'Nicanor Gate' to the 'Court of the Priests' in which stood the 'Alter of Sacrifice'. My only criticism of this picture is the use of Byzantine paneling on the walls. (similar to that seen on the exterior of the Dome of the Rock). Hole was heavily influenced by Byzantine & Arab architecture during his visit to the Holy land, as can be seen from his use of dome topped buildings in his Bible pictures. The other point was that the Court of the Women was actually outside, not inside as this picture clearly shows. Hole would have easily realised this, had he had access to one of the many scale models of Herod's Temple. Sadly, they were all built after his lifetime.

Alec Garrards Temple Model
In my quest to find out more about the Temple I purchased a copy of Alec Garrard's book 'The Splendor of the Temple', (available from Amazon). Suffolk farmer Alec Garrard devoted 18 years to creating a scale model of Herod's Temple which is reputed to be the best in the world! The model measures 20 feet by 12 feet in size. The book contains detailed photos of the model from all angles so it's a great reference guide for Bible artists. This model really has to be seen to be believed. Every single clay brick used in the construction of this model was hand baked in Mr Garrard's oven! The book describes in detail every area of the Temple both above and below ground and suggests the areas of the Temple where the various Bible stories took place. 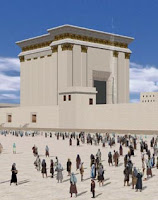 How do we know what Herod's Temple looked like?
After all, as I've already mentioned, it was almost completely destroyed by the Roman army in A.D. 70! Although there is very little detailed information recorded in the Bible about Herod's Temple, there are several reliable sources that describe in detail what the Temple looked like. The following sources were used by those involved in reconstructing scale models of Herod's Temple:
Firstly, they had the writings of Jewish historian Flavius Josephus who lived during the time of Herod's Temple and witnessed it's destruction. To give you some idea of the exorbitant sums Herod spent on the Temple, Josephus speaks of marble being "overlaid with gold!"
The Mishnah, which is a codification of the oral Jewish law, was also a rich source of information for researchers regarding the Temple.
In addition to this, they had of course all the archaeological evidence, and the writings of expert archaeologists like Dan Bahat and Dr Leen Ritmeyer who I believe have written much about the Temple complex. Alfred Edersheim's book 'The Temple: It's Ministry and Services' also proved helpful to researchers and model makers alike.

Architectural details
I've been reading about ancient Jewish Art to try and get an idea of what type of images would be found decorating the interior walls of the Temple. I mentioned in an earlier post that the 'Star of David' was not used till much later but images of seven stick menorahs have been found carved in stone from this period and earlier.
There is some surviving stonework from the Temple that shows that the Herodian craftsmen were careful to use decorative styles that conformed to Jewish law, (no figurative representation). Any figurative representation would contravene the second commandment. Instead elaborate floral motifs were used which included Vine and Acanthus leaves. Later, in the 3rd and 4th cent A.D, when Jewish art became more Hellenised, figures in a Hellenistic-Persian style were found in synagogues, both on floor mosaics and wall frescos.
in I Kings 7:25. The walls of Solomon's Temple had embroidered tapestries of cherubim hanging on them, and of course we read in Exodus 26 of the artistic designs of cherubim being woven into the curtain of the tabernacle. (See the 'Drawing Cherubs' post). I would like to find out more about the internal furnishings of the Temple, so if you know of any good books or links, please let me know.

There are a number of scale models of Herod's Temple around the globe. As well as Alec Garrards 1/100 scale model in the U.K, there was also one in the grounds of the 'Holyland Hotel' in Jerusalem, (which has since moved to the Israel Museum). Another can be found in the 'Holy Land Experience' in Orlando, Florida, and there is a 1/300 scale model made by 'York model makers' which is available from Dr Leen Ritmeyer.
There's only one difference that I've noticed between these models, and that is the design of the four giant 'Lamp stands' that stood in the 'Women's Court'. I can only assume that the descriptions given of them in the sources mentioned above were unclear.

id like to suggest you read the text "THEQUEST" by LEEN RITMEYER publ. by CARTA & LAMB FOUNDATION. hE ASSISTED IN TEH DEVELOPMENT OF THE MODEL IN EAST ANGLIA. He is an archeologist who worked with mazar on the templemout southern wall. this is the best text on the topic . it has received apporval even in some otthodos rabbinical circles

I'll try and get a hold of a copy of 'The Quest'.
Thanks Gerold.

We have just returned to the UK from Australia. Our container, which has a supply of our book 'The Quest - Revealing the Temple Mount in Jerusalem' (440 pages and over 400 colour illustrations, including many reconstruction drawings and pics of models), should arrive in about a week's time.
If you are interested in acquiring a copy of my book book, please send a cheque for £30.00+£5.00 for postage to:
Leen Ritmeyer
4 Glastonbury Road
Sully CF64 5PZ
Vale of Glamorgan
South Wales

Wow! Dr Ritmeyer! It's an honor to hear from you on the blog. I will definitely be ordering a copy so please save me one!
I've been in touch from time to time with Professor Todd Bolan who you may have known when you were in Israel. He has helped answer many of my questions.

I really look forward to receiving your book. I hope that you'll keep in touch and check out the blog when you get a minute.
Many thanks again!

And also thanks for pointing out William Hole. Googling him I'm finding out that he made awesome works!

And maybe you could one day do Caravaggio too! (Even though it's more fine art then illustration of course)