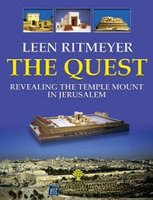 I've just finished reading Dr Leen Ritmeyers excellent book 'The Quest' which is a study of the archaeology of the Temple Mount. This is a terrific book and I would highly recommend it to Bible artists. It's packed with visual information. Diagrams, photos, illustrations, etchings, maps and some superb artwork done by Jewish artists for the Temple Institute which show many of the Temple rituals in detail.

There's too much in the book to cover here, so I'll just touch on a couple of subjects to 'whet your appetite!'
The positioning of the Ark
Dr Ritmeyer has uncovered what appears to be very strong evidence pointing to the actual positioning of the Ark of the Covenant in the Holy of Holies (Debir).
This is a fascinating section of the book which indicates that the Ark would have been seen 'end on' when entering the Holy of Holies via the veil. Not 'side on' as most artists, (including myself), have drawn up until now. It you want to know more, you'll have to get the book! 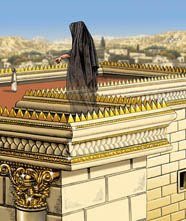 Golden Spikes!
The Quest also deals with the Temple itself and is packed with information regarding it's construction and the many activities that took place there.
Did you know, for instance, what the golden spikes that edged the temple roof were for? To answer this Ritmeyer quotes the Jewish historian Josephus who saw Herod's Temple with his own eyes:
"from its (the Temple's) summit protruded sharp golden spikes to prevent birds from settling and polluting the roof,"

The Quest also touches on some of the interesting topics that we've discussed on this blog such as "What might the Cherubim have looked like?" Josephus said, "As for the cherubim themselves, no one can say or imagine what they looked like."
Despite this, 'The Quest' has some nice photos of a small scale model showing the giant cherubim that overshadowed the Ark in Solomon's Temple. (Not to be confused with the cherubim on the Ark itself).

My conclusion? Some might find the archeological details heavy going in parts, but I enjoyed it and would recommend it as a very useful tool for Bible artists.

Copies of The Quest are obtainable either directly from the author or from the publisher. There are other interesting titles by the same author, (and his wife), available from the Carta bookstore.

Yes, I agree. Two readers have made a very similar point on an earlier post. Accuracy is the key. I've spent all day today drawing the mountains of Judea from a photo!

The Quest has been incredibly helpful already and has enlightened me on many aspects of the Temple layout. There was much more that I wanted to write about so I thought that I might spread it out over a few posts.

I need to start reading the quest again as there was too much information to take in the first time around! The next book on my shopping list is 'The Ritual of the Temple in the Time of Christ.'

No wonder, it will take you a while to take it all in. It took me 30 years to research the Temple Mount. Keep digging!

My apologies Leen!
I should have made it clearer that the type of information that I would glean from a book like this is on a purely illustrative level, e.g. How can this information help me to more accurately illustrate this subject?

I would not want anyone to be under the illusion that I could even hope to take in all the archaeological information contained in this book in one reading! (or even several readings for that matter!) Having said that, even though it is a fairly deep academic study of the Temple mount archaeology, it's still an excellent read!

It will probably take me several readings just to dig out all the illustrative info!
Many thanks again.