Our latest Bible picture story to be completed is 'The Lost Sheep'.
There are 4 pictures in this set which brings our total Bible picture count to 729.
Part of picture 4 (right) shows the traditional method used by shepherds to carry sheep.

Drawing a Biblical Shepherd!
I thought I might share with you a few bits of information about Biblical Shepherds that might come in useful to anyone who needs to draw one.
The equipment of a shepherd:
We only usually identify a shepherd in our pictures by the addition of a staff or crook, but there were a number of other items that a shepherd used too. Many shepherds like David used a sling. A sling was used to both ward off or kill predators that threatened the sheep. What happened though, if the stone missed its target, or the predator was too close for the sling to be used? In Psalm 23, David says "Thy Rod and Thy staff, they comfort me." We've already mentioned
the shepherds staff which was used to hook under the front legs of a sheep that was in danger, and lift it to safety. It was the rod however that the shepherd used to defend both himself and the sheep at close quarters when the sling had failed. 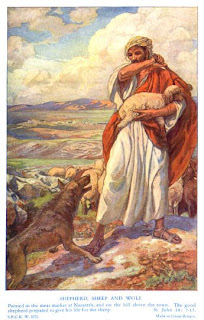 This rod, which you can see being used by a shepherd in the picture (left) by Elsie Anna Wood, was more like a two foot long club, thicker at one end and typically made of oak wood. Sometimes spikes were driven into the hitting end for greater impact! It was a club like this that David used to rescue the lamb from the lion's mouth. David, who was familiar with the shepherds 'tools of the trade,' uses the picture of both the rod and staff to show how God is one who would both Defend and Rescue him in times of trouble. This was a great comfort to him.
A Scrip was a bag that was made of a dried goat's skin and was used by the shepherd to carry his food such as bread, cheese, olives or dried fruit. The shepherd also carried a cloak which doubled up as his bedding at night.

The shepherds entertainment:
Shepherds spent long hours out in the fields, and remember there were no ipods or GoBibles to listen to in those days, they had to make their own entertainment which was often in the form of music.
A flute was often taken into the fields to pass the time. No doubt this had a calming effect on the sheep too!
Were the sheep the first to hear Davids harp playing?

The Shepherd as a Door:
The sheepfold was often just a circular dry stone wall with an opening that served as an entrance into it. It was in this opening that the shepherd sat and slept. In this way the shepherd both protected the sheep from danger and stopped them from straying. The shepherd was acting as a door to the sheepfold. This is what the Lord Jesus was speaking of when He referred to Himself as the 'Door of the sheep'. (John 10: 7-10)

I hope that this has been helpful. All comments welcome!
Elsie Anna Wood picture © SPCK.

Related posts:
What do 'Ewe' think?
Posted by Bible artist at 1:22 pm

Your observation about the shepherds playing music on their flutes to relax - and maybe relax the sheep reminds me of cowboys in the late 1800s playing music and singing on cattle drives. This apparently had the effect of soothing the cattle and relaxing the cowboys.
Times change but many things remain the same.

Thanks Deboraw.
Yes Paul, you could be onto something there.
We had a cat that loved classical music. She would sit right next to the speaker when it was on.

I prefer the translation from my Bible - "The gate of the sheep" rather than the "door" Graham. It is a more fitting description in connection to the stone wall. A fence has a gate - not a door.
I know it's minor but door sounds wrong.

Graham, I've been wondering, I suppose they would have had to carry one or the other, the rod or the staff? But it says 'Thy rod, and thy staff'? Deboraw

The rod and the staff were different. I researched this on a Bible Study site and found this answer -

"The rod was a stick about a yard/meter long with a knob on one end, while the staff, or "shepherd's crook," looked somewhat like a modern cane, although sometimes longer."

It's possible that the shepherd carried the rod tucked into the sash around his waist Deboraw. This would leave one hand free. (The crook being in his other).
Both the scrip and sling were most probably attached to this waistband also.

Graham, Paul, Thank you for your response. I was trying to relate carrying so much in ones hands...all at the same time. Sounds like they had invented tool belts before we did! Of course you couldn't just run back to the house for things. Did they have pockets? I love pockets. Deboraw

Good question!
I suppose the Scrip was a form of early pocket.

Does any one know when this was painted? I have this picture and am trying to find out about it.
Thank you.
JO

Hi Jo
I've forwarded your email on to Dr Sandy Brewer as she's the expert on EAW's pictures. If I get a reply I'll post it here.