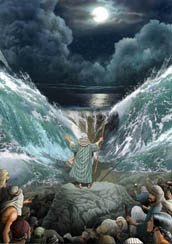 The pictures for our children's Bible are finally finished! So, I am now moving onto the Bible pictures for NTM. This is an exciting project and one that I've been looking forward to starting.

Anyone who grew up in the UK during the late sixties-early seventies will remember the awful fogs!
During the daytime, when the fog was really bad, you could literally not see anything! Other people, buildings, cars, street signs etc, only became visible when they were just a couple of feet away! As you can imagine, it was much quicker and safer to walk than it was to drive a car in these conditions. At night the fog was orange because of the street lights. I never experienced fog in complete darkness, but I imagine it was very disorientating! This must have been the experience of the pursuing Egyptian army. In these conditions it was very likely that the Egyptian chariots drove straight into the walls of water on each side thus toppling the chariots and causing an eventual pileup!

Although I have shown the full moon, the more dominating light source is coming from behind the viewer, from the pillar of fire. The shadow of Moses is being cast onto the dividing waters. I originally did a yellow glow coming from the pillar of fire but, the more I thought about this, the more I thought that the pure fire of the Shekinah Glory would give off a pure white light. What are your thoughts on this?
As always, your comments are welcome.

Update: 4th July 2009
Just had an interesting comment from 'Patrick' in Japan who points out that Exodus 14:21-22 says that: "Then Moses stretched out his hand over the sea; and YHWH drove the sea back by a strong east wind all night, and made the sea into dry ground, and the water was split. And the sons of Israel went through the midst of the sea on dry ground, and the waters were for them a wall on their right hand and on their left."
Patrick concludes that "if God drove the sea by an eastern wind surely the sea should have started to part from the opposite direction (contrary to Cecil B. DeMille's idea of it), since the Israelites are going from the west eastward?
This is a very good point. Fortunately, as I'm working digitally now, this is an easy thing to change. Many thanks for pointing this out Patrick. When I come to illustrating the full story for the 'Bible picture website' I will make the necessary changes.
Posted by Bible artist at 12:51 am

Lovely illustration Graham, a couple of things that impressed me about the Red sea crossing was that "the waters were a wall to them on their right hand and on their left." it conjures up an amazing picture doesn’t it, I can’t imagine how I would have felt if I were there, on the one hand the fear of the Egyptians on the other the tonnes of water on either side of them, then add to that the cloud and fire!
The kids at our meeting did some good drawings of the Egyptians being embarrassed by God removing their chariot wheels v24 & 25.
I love what Moses said to the terrified people the night before “Fear not: stand still, and see the salvation of Jehovah, which he will work for you to-day; for the Egyptians whom ye have seen to-day, ye shall see them again no more for ever. Jehovah will fight for you, and ye shall be still.” What a calming and reassuring message to bring to a besieged and frightened people.

Graham,
This is really a beautiful illustration, actually bordering on the majestic side.
I think I'm going to have to slightly disagree with you that both the pillar of cloud and the pillar of fire were there. I believe according to the text that they were both there, but not simultaneously.
They appear to have been there at different times. This also raises the question of what was the source of the light, a point which I think I will also disagree with you.If we parse the text Exodus XIV:20, "and it came between the camp of Egypt and the camp of Israel; and there was the cloud and the darkness, and it illuminated the night, and the one came not near the other all of the night".
What did not come one near the other? There is here no mention of a pillar of fire. There are two elements mentioned: 1)The cloud and 2)the darkness.
The implication here is that the cloud which was behind the Israelites , and infront of the Egyptians clouded the Egyptians vision. The darkness which may indeed be the darkness emanating from the cloud which was dark for the Egyptians, mystically and contrary to nature illuminated the night for the Israelites.
In verses 21-22 Moses raises his arm, a strong east wind blows all the night dividing the waters,the Israelites go into the sea upon dry ground with a wall of water to the left and right of them. In verse 23 the Egyptians go into the sea in pursuit.
It is only in verse 24 that the pillar of fire is first mentioned. This occurs after the scene of your painting; "And it came to pass in the morning watch (i.e between 2-6AM) that God looked forth on the Egyptian camp through the pillar of fire and of cloud and discomfitted the Egyptians. Moses raise his arm once again "and the sea returned to it's strength when the mourning appeared": verse 27.
It thus appears that at the beginning of the night the pillar of cloud and darkness, both darkened the Egyptians vision, and illuminated the Israelites vision (mystically). Winds blew throughout the night for hours under the illumination of darkness parting the sea, allowing the Israelites to cross.
The pillar of fire appears most likely after the Israelites have crossed safely, and actually enables the Egyptians to see and pursue.The Egyptions were captured by the sea in the mourning when it was no longer dark, for all to witness.
As to wheter the light was yellow or white remains a matter of metaphysical speculation.

Russ:
Many thanks Russ. It's a great idea to get the kids thinking about all the different aspects of these stories. Kids always manage to come up with things that we never think of!

Nahum:
Many thanks Nahum. You are absolutely right about the cloud giving both light and darkness which it does clearly state in verse 20. Then in verse 24, as you also pointed out, it does mention the pillar of fire and cloud.

Rightly or wrongly, I assumed that this was the same pillar in both cases.In my understanding, There seemed to be no reason why the pillar would change from cloud, to fire and cloud, in 3 verses, especially as the pillar or fire was always there at night. I assumed that verse 20 just omitted the fire part. Yes, verse 24 does indicate that some time has passed, although presumably it was still dark as the fire is still mentioned.

I'm presuming that the Hebrew doesn't make this any clearer? If it is that these two pillars are different, there will no doubt be a reason. This is very interesting, or should I say illuminating!

Graham,
I think your logic is pretty sound. The Hebrew doen't make this any clearer. I think the particular words in the text combined with a sense of mystery allows one's imagination to intervene making our different interpretations, and perhaps additional interpretations equally plausible.

Graham, Thank you for explaining your reasoning. Attempting to illustrate a passage is a good way to study, it causes a person to read and reread things thinking of things from different perspectives. Excellent illustration as well, and love the comments. Smile---Deboraw

Graham, What am I doing amiss now? I have been looking for what 'barns' may have looked like for "What shall I do? I shall pull down my BARNS and build new ones. I can't imagine pulling down any type of a permanent structure to build something new in its place. That would be incredibly ? foolish. Very puzzled face 8< Deboraw

First time to comment here...
I really love what you did in the illustration. Many other depictions of Exodus seem to forget that the parting happened somewhere at night.

I just thought that if God drove the sea by an eastern wind surely the sea should have started to part from the opposite direction (contrary to Cecil B. DeMille's idea of it), since the Israelites are going from the west eastward?

Many thanks Patrick! I love getting emails like this, (even though it means a redraw for me!) This is an excellent example of how easy it is to overlook a particular verse. What I like about the sea parting from the opposite shore is that it emphasizes that the power to split the sea was not emanating from Moses, but from God. It was for this reason that I had depicted Moses not in a powerful pose, but simply as an elderly man with his arms raised. However, the sea splitting from the opposite side illustrates this much better.
This reminded me of the significance of the veil in the Temple ripping from the top down, rather than the bottom up, at the death of Jesus.
You are right Patrick, I was almost certainly influenced on a subliminal level by the Cecil B. DeMille epic!

This comment definitely receives a 'Back to the drawing board award'!
Well done Patrick! I hope we will be hearing more from you in the future.

My apologies Deboraw, I almost missed your question on the barns! I have read something about these biblical barns recently which might answer your question. I just need to remember where I read it!!
Let me come back to you on this one.

Graham, Glad I haven't stumped the expert! LOL Isn't it funny the questions that never occur to a person until you have to draw a picture of it? I've never wondered about 'barns' before. One of my little people told me this morning, 'barns, grandma, are big and red'. That was right before he told me that--for his brother Amos at least--being rich toward God meant not biting him (Oshea) on the knee any more. LOL
Children, I have found, have some very unique answers. Smile--Deboraw

Wow, I love it that you show the crossing happening at night.

It is amazing how many children's Bibles show this seen taking place during the daytime.

We are so glad there are those who are seeking to illustrate the biblical events accurately. Your illustration is beautiful done. To help you; here are a few more points that the testimony in the Scripturs brings out concerning the Red Sea Crossing:

#1 The Red Sea Crossing has been found at the Gullf of Aquaba on the Nuweiba Beach; see internet google search.

#2 The children of Israel were headed East through the Red Sea toward the land of Midian, now Saudi Arabia, and it was now morning according to Exodus 3:1,12; 14:24. They were facing the morning sun.

#3 The opening of the Red Sea by most is thought to be something supernatural, but is it? Consider, that all that night YHWH had caused a strong east wind which divided the waters making the sea dry land with a wall on their right & a wall on their left, which in Exodus 15:8 explains exactly what caused the floods to stand upright. It says the waters "congealed in the heart of the sea" - congealed means to freeze. The strong East Wind froze the waters. YHWH simply used His Law of refrigeration to make a path through the Red Sea for the children of Israel.

"It is amazing how many children's Bibles show this seen taking place during the daytime."