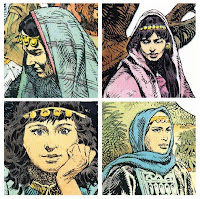 Or what woman having ten pieces of silver, if she lose one piece, doth not light a lamp, and sweep the house, and seek diligently until she find it?
Luke 5:8

“This little bit of silver must have been one of the coins which Jewish, and indeed other Eastern women, sew on to their head-dresses.
Decent women were not seen, even much at home, without these snoods, which is why the loosened hair of the woman, or women, at the Master’s feet is noted.
There were no bank accounts or post-office savings banks for women in those days; their economic earnings were very small.
Till lately, Chinese women put any little bit of money which came their way into buying a silver bangle, or a thin sheet of gold-leaf worn in a bag within their bosoms.
In Judea, a bride came to her husband with at least ten silver coins sewn round her head-band, and often more: and her husband knew just how many there were, for he could see them.
They belonged to him, as she did, although the Law did not allow his creditors to seize these personal coins on his wife’s head.
In fact, a crafty might give his wife many such coins, yet owe much to a creditor, which was very annoying to the latter.
Nevertheless, woe betide the woman who lost her coins: her husband immediately suspected her of a wrong use of them; and the laws of divorce in the Master’s day were so heavily loaded against the wife that a man might divorce his wife if but one of those marital coins was missing from her headgear.
That was why that woman in the Master’s sharply drawn tale of sweeping so desperately; taking broom and candle in an agony of dismay.
She was sweeping, not only for a bit of metal, but for home and shelter and respectability; for her right to a safe and honorable place in society, perhaps even for her right to her children.” – Lady Hoise, in Peloubet’s Select Notes on the International Bible Lessons 1956.

Very interesting Graham. Women had such a hard time at the mercy of their husbands. Did any wife dare question their husband or divorce him? Of course not. It was just a one-way discourse. We see examples of this harsh treatment of women among the Taliban today and in the story of the adulteress being stoned in the gospel story. Disgraceful behaviour in any century.

I have drawn these coin head-dresses on a number of occasions, but if this information is correct it sounds like they were more commonly worn than not.

Hi!
your blogs! it's really beautiful and interesting, Personally for me God is good dids, and devil is bad dids, depends what you performing in your life..

christ force is not a christian blog, its a blog of god raised from bible the holly book with a mission to gather every blogs belongs to christ in one single hub. And to see- How we Christian express themself in term of "God" and to seek the possibility to bring them back to one string of christ force..

this is an invitation if you are interested in joining with us..

Thank you
www.christforce.com
E-mail us at bikasbro@gmail.com
for free member
so that we can list your blog in our page

And what would it have been had Eve not brought such sorrow into the world? Ahh, well. In some countries even today, you see the women of the tribe wearing an extreme amount of 'jewelry' (it appears to me to be extreme). However, it is because partially, to ensure that it isn't stolen, and where else would you keep it except on your person? When you travel in nomadic fashion, it expedites things. Less packing? Deboraw

Did Christ not "Purchase" us? Does He not "own" us? "...for we are not our own..." Just as all things God intended were twisted, so was marriage. God intends for a woman to flourish under the ownership (provision, protection, encouragement, joy, freedom, etc.=love)of a Godly husband, as she does what she was created for - to help him flourish in God as she creates a retreat of rest for him (as a companion, lover, prepares food, bears children to enjoy, encourages & confirms Him in the Lord, etc.=love) Both of them creating like their Creator, loving like Yeshua & being of one mind & one spirit with the Holy Spirit. As an artist myself, it all sounds like a good plan to me no matter what vocation you're in.

Thank you for this. I heard and also read something similar many (probably 30 or more) years ago. Back in those days was in thick heavy reference books now all internet.
I was searching for this information as I am preaching a message at our congregation this Sunday. Looking at the whole "lost n found" story of Luke 15. How Jesus found rescued, redeemed us. Also the idea that something can only be lost if it once belonged. The silver coins have a strong significant and powerful salvation message. Thanks again.

It's Luke 15:8, not 5:8.I was just reading this story in my evening devotions and comparing translations between NKJV and the Message. Very interesting.