Moses in the Bulrushes 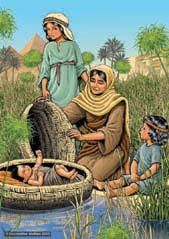 Recently finished the picture set retelling the story of 'Moses in the Bulrushes'. Picture one shows the Israelites hard at work under their Egyptian task masters. I wanted to include in this picture some of the ancient Egyptian building methods such as the splitting of rocks using wooden wedges and water, and the methods used to transport the huge stone blocks. Picture two shows the midwifes before Pharaoh. Picture 3 (right) shows Jochebed placing baby Moses into the bulrushes. I talk more about egyptian bulrushes here. Jochebed is holding back the tears as she places Moses into the providential care of God. Miriam places a comforting hand on her mothers shoulder. Aaron was 3 years old at this time, (Exodus 7:7), and other sources place miriam at around seven years old. There seems to be some confusion amongst Bible illustrators concerning the age difference between Moses and Aaron, particularly later on in the story when they stand before Pharaoh (which I'm illustrating at the moment). Some children's Bibles show Aaron to be much younger than Moses, and in one I own he's about 40 years older! So, just to clarify this, around the time of the ten plagues Moses was 80, and Aaron was 83 years old. I show Aaron with a slightly more receding hairline!

In picture 4 baby Moses is found by the egyptian princess. I've mentioned before that baby Moses was crying at this point which few artists show. Are there any other points that artists should be aware of concerning baby Moses? Yes, he was a fine looking baby! (Exodus 2:2) If you look closely at picture 4 you can also see Miriam hiding in the bulrushes! In picture 5 Miriam is speaking to the princess, and in picture 6 Jochebed and Miriam come to take baby Moses into their care. Jochebed is walking away, with her back to the princess trying to hide her delight, and Miriam is looking up at her mum, daring not to speak, but with a "we got away with it!" look on her face. In picture 7, Jochebed presents a young toddler Moses to the princess. Moses has brought a little gift for the princess - not a flower, but a bulrush head as a reminder of when she first found him. (that's not in the Bible by the way, it's artist's license!) Picture 8 shows Moses, now a young man, enjoying the privileges of living in the grand Egyptian palace.

There are 8 pictures in this set which brings our total picture count to 840. Look forward to your comments as always.

Related posts
Baby in a Basket
Posted by Bible artist at 2:18 pm

Graham,
Very poignant and beautiful painting based on much research.Much appreciated.

Many thanks Nahum. Always good to hear from you.

I love the screaming baby Moses, that will help youngsters (and parents) relate to the story. Well done Graham!

Graham,
Another beautiful illustration of the text. I especially like the bright colors. It lends a feeling of hopefulness that is integral to the story of Moses and God's people.

Your work continues to be an inspiration to us all.
Earnest

Russ:
You've hit on something important there Russ. As well as being important, It can also be a real blessing to meditate on the expressions and emotions of the various characters in each Bible story. How did the people who were present at each event respond? What was going through their minds? Were they shocked, puzzled, overjoyed, sad, Angry? You're absolutely right, If we empathize with each character it does help those viewing the pictures to relate to each story.

I was asking Nahum does he write his amazing picture descriptions before or after he paints his Bible pictures? He replied "I always write the description after the completion of the paintings. Painting the story allows me to meditate on the scriptures," It is so important to meditate on each Bible story as very often a question springs to mind which has been prompted just by the visualizing of the scene!

Earnest:
Many thanks Earnest. I've been enjoying your "How to Create a Bible Comic' posts. We work in a very similar way except I do away with the need to rub out the pencil lines by inking onto a fresh sheet of paper on a light box. I suggested this method to Kozumi Shinozawa as it saves a lot of time!

Graham, I have been pondering (yes, I know, my husband says when I 'ponder' it always gets him in trouble) when the scriptures say, "Exodus 2:2 The woman conceived and bore a son, and when she saw that he was a fine child, she hid him three months." What does it mean a 'fine' or some render it 'goodly', but what does it mean? Deboraw

Hi Deboraw
Some translations also render it "beautiful" or "fair". There are other references to this phrase in both Hebrews 11:23 and Acts 7:20. When you take all of them together, it does seem to be suggesting that Moses was a cute baby! That's how I read it anyway.

The Hebrew word used here is טוֹב (ṭwōḇ, tov), usually translated as "good". Some commentators note that the construction is parallel to phrases in the creation narrative where God sees that His creations are tov, "good".

The Greek Septuagint does render tov with asteos (originally 'urbane'; by implication 'fair', 'beautiful'). And the NT does make two references to this:

Acts 7:20-21 - ...at which time Moses was born (and he was asteos to God), who was nursed three months in the house of the father; and he, having been set out, the daughter of Pharao took him up, and nursed him to herself for a son.

Hebrews 11:23 - By faith Moses, when he was born, was hidden three-months by his fathers (pateron, i.e. parents) because they saw the child was asteon and they were not afraid of the edict of the king.

Well, the thing is this, honestly there are babies that you wonder about "a face only a mother could love", but most babies to their own mother are the cutest things this side of the here and now. So, why was Moses different than any other baby? He must have been in some way. If you want to see some wonderful babies--all of mine were classic Gerber babies, and now being a grandmother, I have the most wonderful 'grand' babies you know. Hmmm LOL Deboraw

I know, I ponder too much. But isn't that what leads to (sometimes) a better understanding of subjects... when people ask the right questions it causes them to search for the answers. Then there are the answers that smack me upside the head--whether I'm looking for them or not. LOL :O

beautiful blog..pls visit mine and be a follower.. thanks and God bless..