Pictures from the Exodus journey 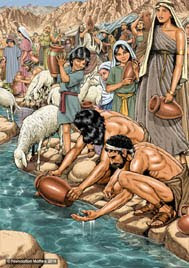 The Jewish holiday of Sukkot - also referred to as the 'Feast of Tabernacles' or 'Festival of Booths' ended recently which is fitting because during this time I was completing work on our latest picture set which depicts how God provided for the children of Israel during their 40 years in the wilderness. During the Feast of Tabernacles today, Jewish people all around the world build temporary booths/shelters, which they live in for seven days, as a reminder of the temporary dwellings erected by their forefathers during the Exodus wanderings. It's a time of thanksgiving for Gods faithfulness and provision!

Picture 1 shows the children of Israel sojourning through the wilderness. All the rocks/mountains have been drawn from photographic references taken in the Sinai peninsula. I noticed that the rocks have a pinkish tinge when compared to the rock colour which I normally use so I've tried to match all the rock colours to the reference photos. Every mountain in these pictures exists although I can't give you an exact location! ;0)

Picture 2 shows the people complaining to Moses that they have no food. Picture 3 is set in the evening and shows a great bevy of quail landing in the Israelite camp. Picture 4 is set in the morning and shows the people gathering manna in pots. I've tried to show the different ways that manna could be eaten - there's a pot of manna on-the-boil, some of it has been baked into buns and some children are eating it fresh off the ground! There have been a number of attempts to explain away manna as a naturally occurring substance - not something miraculous. However, even though there isn't a particularly detailed description contained in scripture, there's enough to rule out a natural occurrence! Remember that this substance appeared every morning, was enough to feed around 2 million people, and only lasted for a day except when collected the day before the Sabbath!

Picture 5 shows the people complaining to Moses again! When we read this account we are often amazed at how much complaining the Israelites did, even after they had seen God deliver them in so many miraculous ways. but the fact is that we are all stubborn and rebellious against God - it's in our nature. What is truly amazing is Gods goodness and patience with us! By nature we are far away from God. This means that the transformation from rebels into worshipers is always going to be a painful one! Our desire for a closer walk with God will lead us into a wilderness journey simply because we need to be changed! In fact, so radical are the changes that need to be made in us - only God can make them! God wants the very best for us, and He knows that the very best for us is God!
We also need to learn to wait on God daily, just as the Israelites did, for anything that's going to be of true value in this life.

Picture 6 shows Moses striking the rock and water bursting forth as the elders watch in amazement! Picture 7 (above) shows the israelites filling water pots and drinking from the newly flowing stream. Remember that this stream/river was enough to quench the thirst of a great multitude so it's unlikely that the water trickled from the rock as we sometimes see in Bible pictures. The lady stood on the right of the picture above is the English illustrator and Bible artist Cicely Mary Barker (when she was young). This is my little tribute to her!

There are 7 pictures in this set which I will link to as soon as they're uploaded to the Bible picture website.
Look forward to your comments.
Posted by Bible artist at 11:00 am

No comments? I'll just wave and promise to comment later, when I've had time to study this in depth. Looks good so far, Graham. Can tell you've been very busy.

Graham, Well the journey wouldn't be so painful if I weren't so slow at getting the message! So, when will the new pictures be available...or am I just not finding them?

Hi Deboraw
Sorry the last couple of stories have not been uploaded to the website as yet. (Jem has been very busy with the camp project).
As soon as they are, I will link to them from the blog. Alternatively you can keep checking on the FM website under the 'O.T. Books of the Law' link.
Our apologies again.

No problem, Graham. I will keep checking--prayerful that all is well on your end of the world. Take care and have a wonderful day. Smile