Sergio Cariello
If, like me, you grew up reading DC and Marvel comics, you're going to really like this next Bible artist interview. This artist has worked on Batman, Superman, Spiderman, Green Lantern, Flash, Fantastic Four, Iron man, Catwoman, Wolverine, X-men, Daredevil... the list goes on! It was no surprise then when the publisher David C. Cook needed an artist to illustrate the 'Action Bible' that they chose Sergio Cariello for the job!

Sergio was born in Brazil in 1964. He broke into the cartoon field at a very early age having his own weekly newspaper strip at the age of 11! After moving to America Sergio became not only an accomplished cartoonist - he was a penciler, inker, colorist and he spent 7 years as an instructor at the Joe Kubert School of Cartoons and Graphic Arts. To read a more detailed biography click here. 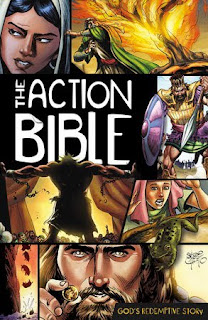 The interview:
Sergio, like me you were growing up during the 'Silver Age' of American comics. I can still remember some of those great artists names, Curt Swan, Carmine Infantino, Gil Kane, Jack Kirby and John Buscema among others. Was there a particular artist who inspired you as a youngster?
One thing to consider is that we Brazilians  did not get, unlike today, simultaneous American publications . We were a bit behind on our translated Comics which consisted of a few issues into one and collections from comic strips of various eras as well. I remember quite a few influences, including the ones you mentioned, and others - I don't know if they fall into the "silver age" category plus some European artists. Among them are: Joe Kubert ,Jim Aparo, Gil Kane, John Romita Sr, John Buscema, Jack Kirby, Nick Cardy, Nestor Redondo, Mort Drucker, and some strip and european artists: Milton Caniff, Al Williamson, John Burns, John Celardo, Sy Barry, All Capp, Albert Uderzo, Jesus Blasco, Hal Foster, Burne Hogarth, Cotsky, and the list goes on and on.

When were you first introduced to the Bible, and can you remember which one you owned?
We had a few bibles in the house, all in Portuguese. My parents took me and my brother to church when we were very young. I remember my favorite was the Picture Bible books, illustrated by Andre Le Blanc. It was the black and white portuguese version. Little did I know that those booklets were the Brazilian version of the Original American version of the Picture Bible I would end up illustrating!

You live in the US now - where are you from originally and what brought you to the US?
I was born in Recife, Pernambuco, Brazil. When I wad 5 I told my parents that I would become a cartoonist when I grew up. That desire increased over the years and I begun to dream of coming to america to fulfill that goal. Especially when, in 1984, I saw an ad of an ugly bird talking to a cave man about the Joe Kubert School in New Jersey. I knew I had to attend that school so I started saving money and began learning English. My family helped me pay for the plane ticket from Brazil to America and George Theis, director of Word of Life Bible Institute in upstate NY , who knew me from attending the Word of Life Bible Institute from my home town back in 81, gave me a tuition scholarship to attend their bible institute in Schroon lake, New York. 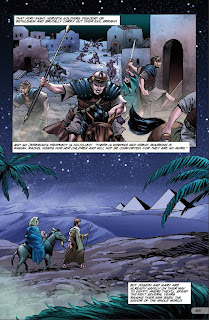 Tell us a little bit about what was involved in producing the illustrations for the Action Bible?
I gathered books on the subject, either photographic books or paintings and or drawings , as well as DVDs and some objects and a few color prints from the Internet . Anything that could help me as reference, just like I do with every job I get to do. I'm really into getting props and objects and tons of books to bombard my brain with info before starting to draw.

We've discussed inking techniques on the blog before - it seems like graphics tablets such as the Wacom Cintiq are now competing with the traditional brush/pen and ink methods. How to you ink in your line work?
The cintiq is just another tool from my "tool box" which I use to produce my comic pages. So...No competition between them here in my studio but collaboration! I still enjoy starting my work with pencils, pen nibs, India ink, brush and paper. I enjoy the feel, the noise of nib scratching the surface of the Bristol board, and the smell of pencil lead, ink and paper. I like to get my hands dirty and to hold an actual final, real /physical product, as opposed to virtual. But at the end I scan the art and use the cintiq tablet to edit any final touches before "sending" it off through the air waves.

That's a good point - the nearest thing you have to an original when working digitally is a computer print out! How do you add the color - was it done digitally?
Yes. I submitted my own colors to get the job but I subcontracted 6 guys to help me color the pages.

There's a tremendous about of work that's gone into the Action Bible - How long did it take you to complete?
It took 3 years to complete. 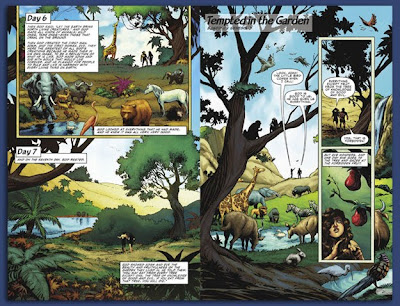 I'm always amazed at how much historical research goes into cartoon strip versions of the Bible. How did you go about your own research?
With the help of historical Books, props and images I acquired from Bookstores and the Internet, I discovered how the philistines dressed and how the helmets of their soldiers were supposed to look like. I also was able to draw the pagan gods accurately. I'm sure the experts will probably find a few things inaccurate in the book but I sure tried to make everything right. I also had help from the editors of  David C Cook to point out some things I had missed.

Did you find that there was a particular Bible story that was difficult to illustrate and why?
The Battle and multitude scenes were a bit more challenging than the regular pages since they had a lot more people to draw.

One of the topics we've discussed on the blog has been 'what did Jesus look like?'. What influenced your depiction of Jesus?

I watched some movies portrayals of him and observed what other artists had done and came up with my own. I did not want to depict a weak Jesus, nor angelic, or delicate - but a tough, manly carpenter Jesus, with expressive eyes and fit body for those long walks.


Are you working on any other Bible related project at the moment that we can look forward to seeing?
I'm working on "The Christ" series, written by Ben Avery for Kingstone Media. It's a book that shows the life of Our Lord Jesus Christ based on the 4 gospels.

Are any other members of your family talented comic artists?
My mom, Celia Cariello, paints abstract art and won a few awards in Brazil and my brother Octavio Cariello who lives in Brazil has drawn for American comics. He also teaches art in a Brazilian art school.

Do you use your talents in your church - Perhaps in Sunday school?
Not yet in it's full extent. I just now did this Action Bible so I don't even know what's available from it, but I do play the guitar, sing, compose songs and lead worship in my church and I've used some of my drawings to teach the word. One time I drew a life-size Goliath to use in my preaching to a congregation in Jersey for the whole church (adults and children).

Many thanks again to Sergio for taking the time to speak to us. Looking forward to your comments.
All illustrations © David C Cook 2010-11
Posted by Bible artist at 12:28 pm

One of my daughters bought me a copy of 'The Action Bible' for Christmas! Top marks to Sergio and D.C. Cook on a great job!

Graham, Thank you for a very interesting interview. Enjoyed it.

I wish there were more illustrated bibles like this one.

Ilustrating the bible is the most interesting thing that an artist (cartoonist) can do, IMHO.

Btw, check out this one too:

When is it new years over there, Graham? How far are you all from central standard time. I know I'm just lazy, but it sticks better when someone tells me. Embarrassed face here...

You're between 5-8 hours behind us depending on which part of the U.S. you're in. If you're in Iowa, you're 6 hours behind us! I'll try to post 'New Year Wishes' around midnight here.

It will be about midnight there when family and friends begin to arrive here! I will think of you and your family. May God bless and draw you closer to Him always.

Great work Sergio! I love the art!
Kids love comics and that is a way to reach them with Christ.

This was specially interesting to me as I am from Bahia,Brazil andI live in US and dream to illustrate the bible.
Very nice interview! Thank you kindly for sharing it!

I appreciate you for posting such a great Blog. The youth bible study lessons include tools to make learning fun and bring the children into an encounter with God. Tested nationally and internationally, this curriculum has been effective in training this generation.

Awesome info, as an artist I was greatly encourage to keep doing Bible Art and to link with other artists. I'm still looking for a market for my work. Thank you for your site and I've got to get a copy of the Action Bible.