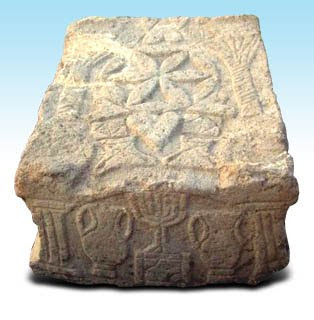 I'm always on the lookout for photos of ancient carvings on stone that give us an idea of the designs that were used in Bible times. I was very pleased to see an article in this months issue of 'Israel today' that shows a 2,000-year-old stone that has been found in the remains of a first century synagogue in Migdal. Migdal lies on the northwest shore of the Sea of Galilee and is thought to be the birthplace of Mary Magdalene. The ancient stone is carved on five sides with reliefs which include oil lamps, rosettes, columns, arches over corn sheaves, ivy wreaths, a seven-branched menorah between two goblets and other geometric designs. For more pictures that show the other sides of the stone, search 'Migdal excavations' on Google images.

The article doesn't mention what the stone may have been used for - any ideas anyone? It was found at the centre of the study rooms in the synagogue. As the stone is carved on five sides it seems unlikely that it was a base for something else. 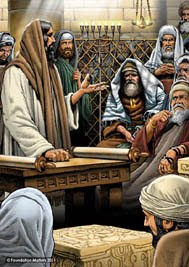 The article goes on to say "It is likely that Jesus visited the synagogue in Migdal and may have taught there. If so, as He stood before the congregation reading from the scroll of the Torah, this very stone would have been at His feet!" After reading this, and as I had to draw Jesus teaching in a synagogue this week, I couldn't resist adding the stone! (See right). I plan on using the other designs shown on the stone in other biblical interiors.

The stone will be placed in Prime Minister Binyamin Netanyahu's office in Jerusalem. The article says "The presence of the stone in the Prime Minister's office serves as a reminder that in Temple times, as today, the menorah was the emblem of Israel and Jewish nationhood". This reminded me of something that I mentioned in a past blog - some Bible artists have used the Star of David design on the interior walls of first century synagogues. A seven-branched menorah would be a more accurate design to use as the earliest examples of a design that resembles the Star of David are only found in 3-4th century synagogues.
Green text © 'Israeli today' 2011
Posted by Bible artist at 1:30 pm

Question, Graham. I thought the teachers sat, and the audience stood?

Hey, just noticed the change in picture...is that you, Graham? Nice hat...LOL

Hi Deboraw, yes that's me in my Roman helmet - I'm saving up for the rest of the outfit!

I believe It was the custom to sit while they expounded the law and prophets, and to stand when they read them.
Matt5:1, Luke 4:20-22

LOL! Yes, that's my mean tough Roman soldier expression - I've been practicing it for a while!

But I wanted to point out to you that most of this stuff goes back to the late Second Temple period.

This means that it has very little to do with the Bible.

Isn't the Late Second Temple Period 200BC-70AD? That would include the New Testament wouldn't it?

I just think it would reflect better if you'd give it more of a ...decadent(?) look ?

You know... to sort of underline the spiritual decline of that era...

Yes, this is Second Temple- New Testament period. Typical of Netanyahu, though, to hog this find for himself instead of its being exhibited in the Israel Museum or Bible Lands Museum where it belongs-- just so the politician can have something to be smug about in front of guests.

Hi! Thought you might be interested to know that the 6 petaled flower design became an symbol of the early Christian church....

The Lily (both three petaled and 6 petaled) was a symbol in judaism for a long time...this article talks about that, though the pictures used mainly focus on the 3 petaled one and don't seem to be from Jewish sources:
http://zeevgoldmann.blogspot.com/2008/08/ii-star-of-david-on-mosaic-floor-at-ein.html

A while back I was doing research (way more than what was necessary...cause I love the subject) for a Holy Land themed VBS. I wanted to find some 1st Century designs to use in our crafts--ones that wouldn't have offended a Jew from that time (no people, animals).

A Tile Floor of a 1st Century Rabbi in Jerusalem:
http://commons.wikimedia.org/wiki/File:The_Herodian_Quarter_P8050085.JPG

Herodian Plates (Herodian is a good search term when looking for this type of thing - refers to anything from Herod's era, not just stuff that belonged to Herod)
http://dcl.umn.edu/search/show_details?search_string=%20painted%20pottery&per_page=60&&page=16

Wow! Those are really helpful links - many thanks Gale!