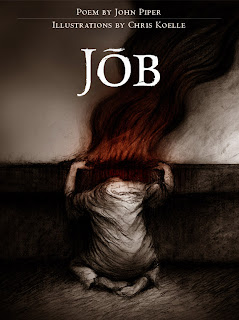 Bible artist Chris Koelle has just sent me some information about a movie project of his on Kickstarter. Chris has illustrated a book titled JŌB which is basically a poem written by John Piper based on the biblical story of Job. The book has now been turned into a movie animated by Danny McNight and narrated by John Piper. (Click the word 'Movie' above to view).
To read an interview with Chris Koelle about another book project of his - a graphic novel titled 'The Book of Revelation' click here

Let me also tell you a little bit about kickstarter as it might be of interest to readers of this blog.
The following text is 'an introduction' from the kickstarter website

"Kickstarter is the world's largest funding platform for creative projects. Every week, tens of thousands of amazing people pledge millions of dollars to projects from the worlds of music, film, art, technology, design, food, publishing and other creative fields.

A new form of commerce and patronage. This is not about investment or lending. Project creators keep 100% ownership and control over their work. Instead, they offer products and experiences that are unique to each project.

All or nothing funding. On Kickstarter, a project must reach its funding goal before time runs out or no money changes hands. Why? It protects everyone involved. Creators aren’t expected to develop their project without necessary funds, and it allows anyone to test concepts without risk.

Each and every project is the independent creation of someone like you. Projects are big and small, serious and whimsical, traditional and experimental. They’re inspiring, entertaining and unbelievably diverse. We hope you agree... Welcome to Kickstarter!"

A spokesperson for Kickstarter, Cooper Troxell, told me that although Kickstarter only handles projects based in the US at present, they are hoping to go international soon. Watch this space!
There are a number of other christian projects on kickstarter so check it out.
Posted by Bible artist at 5:37 pm

can't wait till it comes out.

I don't know why they have never made a movie of this before. There's one on Joseph, and Daniel, and even on Esther.

Better late than never I suppose.

Great thoughts you got there, believe I may possibly try just some of it throughout my daily life.