The Joys of Blogging! 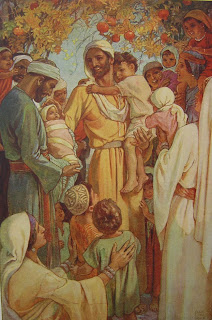 I think all bloggers will agree that one of the great things about blogging is the friends that you make from all around the globe! I'm really thankful for all the amazing people I've met through the B.I.B. Every now and again I get sent something in the post from A blog reader - which is the icing on the cake! This last week, (actually it was a few weeks ago when I wrote this post), I've had two such parcels.The first came from Dr Sandy Brewer who sent me all her duplicate Elsie Anna Wood posters. I've never seen these posters in-the-flesh before and they really are superb! Many thanks Sandy! If you've never come across Bible artist Elsie Anna Wood before, then I would recommend the posts below:
Elsie Anna Wood.
More Elsie Anna Wood Bible Art.
A Gift Returned with Love. 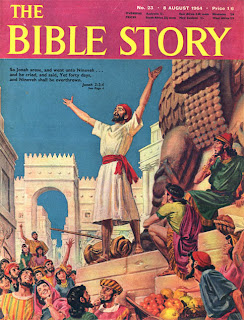 The second (very large) parcel came from John and Sheila Wastie in Shrewsbury.John sent me almost the entire collection of 'The Bible Story' magazines published by Fleetway Publications Ltd in the sixties. John also included some 'Look and Learn' magazines. What was really exciting about this was that he had included the issues from 26th September 1964. This is when the Bible Story was absorbed into Look & Learn. I always wanted to see these issues to see how much of the Bible story magazine survived, and for how long it lasted.Following the amalgamation only three pages were dedicated to the Bible story. This soon dropped to two, then one, and sadly by the 26th December 1964 'The Bible story' magazine was no more! Many thanks to John for helping me fill in this gap. I explained to John by email that, although I already have the full collection of 'The Bible Story' in it's original binder, I've not been able to use them as the whole thing is so big and heavy and I don't want to risk taking any of the magazines out in case I damage them. Now that I have all the loose magazines I can easily use them for reference.John also sent me some 1968/9 issues of 'Tell Me Why' magazine that I hadn't seen before. All these magazines for children were in the same large format and all published by Fleetway and all boasted an incredibly high standard of illustration. The only other one I remember from childhood was 'Treasure' which also included a 'Stories from the Bible' section. Many thanks again to Sandy, John and Sheila.
Posted by Bible artist at 7:50 pm

Graham, you lucky duck! Could I try impersonating you, and then perhaps someone would send ME some of Elsie's pictures! Those are so neat. Congratulations from a (green with envy) friend. LOL Was thinking maybe you were in hibernation ;). Take care and would like to hear more often from you.

Hi Deboraw, thanks for that! You'll be happy to know that I'm building up a few posts ready to publish when I get a minute! (I only hibernate at Christmas!)

Patient? Not me, but I try. Say, apparently robots must be everywhere. I wish these 'words' weren't so difficult to read. I even had to unearth my glasses!

I have the same trouble Deboraw - is the text on packaging and tins getting smaller or is it my eyes?

A wonderful surprise for you Graham. Any favorite artists from among the illustrators?

Hi Paul
Yes there's a reprint of 'The Life and Times of Herod the Great' by Don Lawrence and really nice black and white pastel illustrations (on grey paper) by Paul Rainer.

Don't even mention text on packages. I know the manufacturer is just trying to discourage me from buying their product. And there are too many other things as well!

Does anyone know how long that series ran and if they whole set is available for viewing somewhere? I am very interested in taking a look at them.

You can view pages from the Bible story here:
http://www.lookandlearn.com/if?cat=04~The_Bible_Story
The first issue appeared in March 1964 and the final pages, after it was absorbed into 'Look and Learn', are found in Dec 1964. The series lasted for 10 months, but it was weekly.