Picture 3 (left) shows Peter being led across the prison courtyard by the angel as the gates open before him. We can see the shadow of the large iron gates beyond these also opening. A Roman guard is dozing by the fire. If you've read 'The Heavenly Man' you'll recall that Liu Zhenying (Brother Yun) had a very similar experience to this when escaping from Zhengzhou Maximum Security prison. 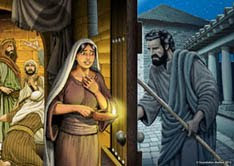 Picture 4 (right) shows Peter knocking at the door of his fellow believers. I've done this picture like a split-screen to show both Peter knocking and the reaction of the girl who recognizes his voice. The final picture shows Peter reunited with his friends. He's sharing with them the story of his miraculous escape!
Posted by Bible artist at 3:28 pm

can you explain why these pictures can be purchased?

I can explained where they can be purchased from - www.foundationmatters.org/store
If you're after one of the recent sets that you've seen on this blog but, as yet, haven't appeared on our website you can email Jem Hudson and he'll be able to help.
jemhudson@mac.com
Thanks for your enquiry.