DC comics 'Stories from the Bible'

Had a reply recently to an email I sent to Joe Kubert.

For anyone who doesn't know who Joe Kubert is, he is one of the great American comic book artists who worked during the 'Golden and Silver age' of comics for DC. Famous for his work on 'Sgt Rock' and 'Hawkman' amongst others.

I had asked him if any more issues had been printed from the DC Comics 'Stories from the Bible' series which he edited, and Carmine Infantino had published back in the mid 70's. 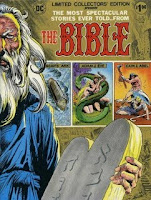 Mr Kubert told me that although he was Jewish and proud of it, he had fully intended producing the entire Bible, including both Old and New Testament stories in the 'Stories from the Bible' series. Unfortunately, because the workload on him at the time was so great, the series never passed issue one!
Issue one, for those who haven't seen it, covered from 'Creation' to 'Sodom & Gomorrah', and was illustrated by the late Nestor Redondo.

This is one of those 'what if' projects, where we are left to wonder about the amazing artwork that might have been!
Sadly, I can't imagine DC comics or Marvel ever attempting to do a project like this again.
More about Joe Kubert here.
Posted by Bible artist at 12:04 am

It's great that you got a response from Joe Kubert. His Sgt. Rock and general war comic artwork is a classic of its era.
A pity he never got to complete the Bible comic series. I can understand his workload being heavy though and the best selling super-hero and war comics taking priority at DC.

Yes, it was a shame that the project was shelved. Surprising too, as it seemed to be a project that was close to the hearts of both Joe Kubert and Carmine Infantino.

I know that you're an expert on DC comics Paul, so just remind me, what characters did Carmine Infantino draw? My memory is rusty!

Carmine Infantino's greatest comic book artwork was reserved for The Flash (in my opinion). In fact his artwork launched the Silver Age of comics back in the 1950s. He also illustrated Adam Strange and reinvented Batman for the 1960s in Detective Comics. There is a book available on his career. Definitely recommended.

I've just discovered the following interview with Carmine Infantino in which he discusses the Bible comic series.
This interview is copyright Jon. B. Cooke from "Comic Book Artist" magazine. The full interview can be found on http://www.twomorrows.com/comicbookartist/articles/01infantino.html

CBA: What was Shelly Mayer's role at DC?
Carmine: I called him once in a while and we just talked. I remember asking him about doing the Bible tabloids and he wrote those for Joe Kubert. He also wrote the one about the New Testament but that was never printed. It was in script form-he wrote his scripts with little pictures. He did them all that way.

Thanks Paul!
The web link in Pauls last comment was cut short!
It should have been:
http://www.twomorrows.com/comicbookartist
/articles/01infantino.html
Thanks again.

Just read the 'Infantino' interview.
Ahhh, takes me back to a past life!
DC comics were the best!

Sheldon Mayer's connection with "Picture Stories from the Bible" and DC - National- All-American comics goes back to 1942 where it ran for four issues. These issues covered the Old Testament. In 1944 a further three issues covered the New Testament. EC Comics reprinted these issues in 1946 in five 52 page comic books. They also published a 144 page edition in 1946 containing the three New Testament issues in one volume.

As a footnote a UK edition, named "Bible Illustrated" containing the same interior artwork was published in 1947. The comic ran to eight issues.

I am fortunate enough to have the treasury edition from 1975, and I have to say this is the most beautiful comics adaptation I've ever seen of the Old Testament (selected stories, of course). Not to be rude, but most other adaptations are done by very pious people who -- even though they may be capable illustrators -- lack the skills of a COMIC BOOK ILLUSTRATOR. Seeing these tales brought to life by great artists like Joe Kubert and Nestor Redondo is a rare treat. I'm very excited to hear about this reprint.

Ive got that book and several other oversized titles...like superman vs mihammed ali...superman vs the flash...supes vs wonder woman..they also reprinted Action Comics 1 in 4hat format....