This post is not really on the subject of Bible illustration, but I thought this off-topic item might be of interest to some.

I recently came across Bruce Barry's website, 'Wacky World Studios' based in the U.S.
Wacky World Studios specialize in producing themed environments for children's churches. Bruce explains his mission here, I think basically the idea is to make children's church more of a stimulating environment for children to be in.
Dave Walkers cartoon above suggests that some youth groups might want to take the concept a step further! To see more of Dave's cartoons visit CartoonChurch.com

I was reminded when viewing the 'wacky world' site of a similar type of work that I used to be involved in. Many years ago, before I started illustrating the Bible, part of my work was to produce concept art for theme parks worldwide. The two samples below were done for a proposed 'Bible theme' visitors centre.
The first one depicts the 'Parting of the Red Sea'. Visitors walk between two gigantic water screens that have movie images of pharaohs chariots and soldiers projected onto them. A larger than life model of Moses is stood on the rocks behind with the pillar of fire by his side.

The second picture shows a full scale model of Goliath that children try to knock down with a carefully aimed stone! There's a touch sensitive pad on Goliath's forehead which, when hit by a stone, causes the model to fall backwards onto the ground!. A boy can also be seen trying to lift Goliath's shield, (bottom right).
Unfortunately, both these ideas never got past the concept stage. 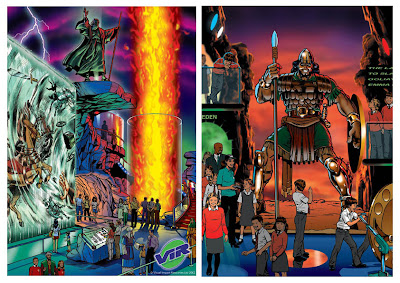 Bruce Barry's site also provides ready done Bible murals for church walls. (see 'Bible murals' in the link list). Speaking of murals, check out the mural that the children in our church worked on here.

Also recently found a link to some 'Biblical theme park' concept art for sale from the early 60's.
'Bible Storyland' was conceived by Disney Promoter Nat Winecoff and should have been built in California around 1960. Check out this early concept art here.

Update: 9 June 08
I've just come across another article about a new proposed Bible theme park for Tennessee here. I think you'll agree that the artists rendering of the 'Exodus experience' looks strangely familiar-!!
And before you ask, No! They never asked me if they could use the idea!
Posted by Bible artist at 7:05 pm

I've always considered the atmosphere of a church should encourage meditation and quiet reflection. A sanctuary from the commercial world that is continually telling us to buy and accumulate goods. I'm not in favour of Biblical Theme Parks because they encourage such commercial trade and ultimately trivialize Bible teachings which aren't about outward show but inner truth.

While I understand the need to stimulate interest in children for Bible stories I feel the place for any Disney type material should be in the Sunday School. The church should remain sacred space and not be invaded by Americanized pop culture. It's important that the gospels retain their dignity within the church.

I agree! I'm sure that 'Wacky World' just theme the children's areas of a church where Sunday school takes place. I wouldn't think that a church would theme it's main worship area.

Yes, a lot of people find the whole concept of a Biblical theme park, a little tacky!
In fact, my concept art is probably a good example of what you shouldn't do with a Biblical theme park! lol. Not long before I did this artwork I had been working on designs for 'Thunder City' in South Africa, so my head was still full of jet fighters and drag racers! I was also heavily influenced by 'Landmarks' slick concept art too!

I believe that the 'Holy Land Experience' in Florida has been tastefully done with an emphasis on education. I've never been but I did some character designs for them a few years back.
As you say, it you get it wrong, there's a danger of trivializing the Bible stories.

As an Englishman living in America I probably view this subject within the framework of my British background. I know worship in America takes on many varieties. There is nothing wrong with adapting the gospel for particular communities as long as the message isn't changed or diluted.
If children can be introduced to the gospel through comic books, cartoons or other media I see nothing wrong with that either. In fact I wish more of this was around when I was a kid.
I just object to commercialization where I see opportunists at work. I'm certain a Theme Park might work with the proper management but it could also turn into a travesty. I recall a "Simpsons" episode where Ned Flanders started a Bible story Theme Park. A funny episode that demonstrated how easily good intentions can get out of hand.

It was interesting looking at the 60's concept art, to see the men wearing suits and ties, (even on the rollercoasters!), and the ladies in hats.

Going to theme parks in the 60's was obviously a special occasion. Like international air travel at the time, it was something worth dressing up for!

This looks very familiar Graham. Sadly there's no copyright protection for ideas. Especially if the original source is in the public domain and not copyrighted itself. The person could easily say they based their idea on the Biblical verses. Which they might have. The similarity of the concept could merely be coincidental being based on the same source material. Or they could have seen your idea and thought, "I like that!" But I doubt anyone would admit to it.

It's really tough to secure any ideas from spreading it out. I believe skill never leaves anyone if it used properly.