Jeff is our first 'Guest Bible Artist' to be interviewed on the Bible illustration blog.
Jeff is based in the U.K. and illustrated the 'Lion Graphic Bible' back in 1998. I asked if I could do an online interview with him, and he kindly agreed.

When did you start illustrating as a career?
I attended Art Collage in the late seventies and started working as an illustrator around 1980, first of all in a Greeting card studio, then as a freelance. At first I did any thing that came along from educational books to pub signs. But my real love was always comic and I started working for Marvel and Fleetway around 1984/85.

How long did it take you to illustrate the 'Lion Graphic Bible'?
Well, I was working on a couple of books for Lion called ‘Shadows Edge’ and we talked about doing the Bible a couple of times but it seemed too big a project. After a while we decided to give it a go, and I started working on roughs in February 1994 and I finished in August 1998. There were others things going on at the same time, but the Bible was my main interest and focus.

What advice would you give to an artist about to illustrate the Bible?
Think long and hard. 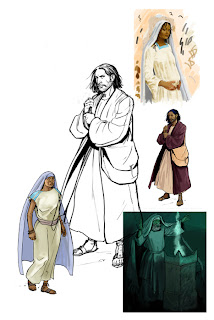 What's your next Biblical illustration project?
I’ve just completed a Theology degree and as part of my work I produced a treatment of The Gospel of Luke, I only got about half way through the rough stage. At some point in the near future I’ll get back to working on it.

What other Bible artists have influenced or inspired you?
I’m a massive Frank Bellamy fan and love the King David series he did for Eagle; and I like the Frank Hampson version of the life of Jesus as well, though it has become a little dated! But what both Mike Maddox and myself wanted to do was just produce something that would stand up to any thing else in the market.

What difficulties did you experience finding Biblical references?
When I was working on the Graphic Bible it was a case of going to the library and looking around bookshops for books that would be helpful. There is also a good resource center here in Durham so I joined that and used that a lot. Lion also provided photocopies and refs as well. I remember spending ages looking for a good ref for the particular type of sheep found in the middle east, nowadays I would just Google it!

I believe that you've had a change of profession? Tell us more.
Yes, I was ordained in July ’07, a journey that has taken about six years.

Did illustrating the Bible lead you toward this choice?
Yes it did, working on something like that certainly makes you think about how you want to work out your faith and life as a Christian. Over a time of working out where I went next it became clear that I was being called towards working full time as an ordained minister.

Did your talent come in handy when training for the ministry?
Insofar as it allowed me to work on an adaptation of Luke, and get out of a few essays!

Will you be using your art in your new parish?
We use a lot of computer presentations for services so I’m able to do bits and pieces for that and I as I said I’m hoping to get back to the Luke adaptation sometime.

I noticed that you took the bold decision to move away from the traditional choice of clothing for the Lord Jesus. What led to that decision?
What we wanted to do was give some sort of impression of the progression of time, rather than just have a people wearing tea towels on their head. With Jesus we thought we should keep to some sort of classic portrayal with the treatment of facial features and such. But we wanted to make him different from those around him in some way, other than that I can’t remember how we arrived at the colour of clothes and such. One thing we did want to do is make him look as though he could get up on to your roof and fix it. Can’t imagine Robert Powell do that.

Your pictures have been well researched. I noticed the dark blue stripes on the prayer shawls, the authentic carpentry tools in Joseph's workshop, and no domes on your buildings! What source of research did you find most helpful?
Again it was just a case of trawling around the library and bookshops for the right thing.

I enjoyed this..can't wait for the next one!

Thanks ArtistXero
Nice to hear from you again.
The next one is already in the pipeline!

I've just come across your 'illustrated Bible blog'.
You should have have let me know about it earlier!
I'll add it to the links.
Keep up the good work!

Ahh..I started the Illustrated Bible with some of the other Bible artists but we're all so busy and none of us have much time to focus on it. I was thinking when I had more going on there I would tell you about it.

I look forward to that.
Blogging does take up time, and when you're busy, it does have to take a back seat.

I run three blogs, but only one gets updated regularly!

The next 'Guest Bible artist' is from the U.S.

Going back to Jeff Andersons article, he mentions Frank Bellamys King David strip.
I've never seen this. Does anyone know if you can view it online anywhere?

Here is a link to a few panels from the Bellamy strip Graham. An outstanding UK comic artist as you know.

Paul Green said...
This comment has been removed by the author.
6:20 pm

Paul Green said...
This comment has been removed by the author.
6:22 pm

Thanks Paul.
The best way to leave a long url in the Blogger comment box is to split in into two.
For some reason, any url that's longer than around 8 words seems to get cut off.

I'm not sure why Blogger haven't sorted this out.
Thanks for the other url that you sent via email.

Thanks Norman, I'll try that.

Going back to Jeff again, (but a little off topic), I believe jeff worked on 'Judge Dredd' for a time!

Good to see Jeff is still going with his amazing artwork.....he worked for us on the now, sadly defunct 'Over the Edge' comic, providing a stunning cover for issue 3. He is missed in the British comics scene!

He's moved on to bigger things.