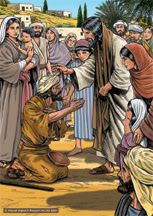 The latest set of Bible pictures to be added to the 'Bible Picture website' tells the story of the healing of blind Bartimaeus. The story takes place on the outskirts of Jericho.

Jericho had the ancient title of 'City of Palm trees' referring to the abundance of palm trees in the area, so remember to add palm trees when illustrating one of the many stories that take place here. Jericho is believed to be the second oldest continuously inhabited city in the world, and has been described as a "lush green oasis in the desert". The fertile soil of Jericho, which once made it famous for its groves of balsam, spice and date palms, was apparently due to the skillful irrigation of earlier times. For this reason Josephus refers to it as the "divine district".

Just like today, those who beg chose the busiest thoroughfares to position themselves in. Many Jews met in Jericho before traveling to Jerusalem for the passover celebrations, so the road leaving Jericho became a popular spot for beggars. Bible artist William Hole, who visited the Holy land to gather references for his Bible pictures, noticed that blind beggars had their begging bowls fastened to their waist by a cord. Presumably to deter potential thieves. It's reasonable to assume that this practice was passed down from ancient times.
In his book 'The Life of Jesus of Nazareth' Hole points out that blindness in Palestine during this period was "grievously common, the proportion of those afflicted being one in every hundred of the population".

In picture 3, Bartimaeus has discarded his blanket, (Mark 10: 50), and is kneeling at the feet of Jesus. The act of discarding his cloak is very significant as it was his only possession. (He had forsaken all to follow Jesus!) This cloak would have been his only protection from the cold at night, and his only shade from the hot sun during the day. So important was a poor man's cloak that the Bible, (in Exodus 22: 26-27), sets down strict regulations regarding its use as property. It states that even if this garment has been pawned, it must be returned to its owner before sun down, for "What else will he sleep in".

I've heard, although I've not checked it out, that begging in Bible times was a recognized profession for those who were unable to support themselves, (e.g. those who were blind and lame etc), and that beggars wore a cloak that identified them as beggars, a kind of official uniform! This made the discarding of this beggars uniform an act of faith on the part of Bartimaeus, trusting that he would no longer need it. I'm not sure if Josephus mentions anything about this. I would be interested to know if there is any evidence to suggest what color a beggars cloak might have been.

In picture 4 we see Jesus walking away in the distance. the Bible says that Bartimaeus followed Him in the way. Notice that the road that Jesus took was the road to Jerusalem, and the cross! Bartimaeus was one of the few followers of Jesus who was ready to follow Him all the way to the cross.

There are four pictures in this set which gives us a new total picture count of 695!
The next picture set I will be working on is a new version of the Nativity, which (God willing), should be ready in a couple of weeks or so. We do already have Bible picture sets of the Nativity for those who can't wait, but the new ones will be in the new (more detailed) style.

Posts on other Bible stories
The Rich Young Rular
Zacchaeus
Crucifixion part 1
Crucifixion part 2
On the road to Emmaus
The Nativity
Raising Lazarus
Woman taken in Adultery
Posted by Bible artist at 6:29 pm

Looks like you have another good one. Keep up the good work.

As a side note, what do you think about using old Byzantine art for clothing and people’s features? I have been studying Orthodoxy and Church history lately, getting in touch with our roots. The art and music is amazing. Both have a certain… texture and aurora that is pleasing to the senses. And it seems to better reflect the cultures of the peoples native to the area of the Holy Land.

Come to think of it, this is not a side note - it directly relates to our subject matter.

Here are some more thoughts relating to my question pertaining to reference sources. It seems that the earliest art we have that depicts the Savior is from Christians in the area of Rome. Surely they depicted our Lord using themselves as reference – so He looked like a person from that area and time (short hair, no beard, etc.). Now, it is widely criticized that European artists of the Middle ages contributed to forcing a Euro-centric view upon the rest of the world using Christian art. I disagree with the claim that there was an attempt to "white wash" history. Of course the art showcased people that looked European – because that was the reference for the artists of that time! I think that we should also be critical about the art from the early Christians in the area of Rome, considering their references for art.

Understanding these things, now consider that the art of the early Christian church in the Middle East was made using the people of that area as reference. Sure, it was a couple of hundred years after Jesus; but don’t you think that those artists would have the best reference for their art? All an artist had to do was talk to the elderly and ask them what their grandparents, or great grandparents, dressed like (or maybe the manner of dress had not changed!). Further, I think the reference people for artists of that time and area are ethnically closer to the Jews that lived at the time/place of Messiah. Considering some of the history of the Byzantine Empire, I realize that the art of the early Christians of the Middle East may not be the perfect source for reference today. But perhaps this is the best we have – and the accuracy may be… astounding.

And the coolest thing about this whole idea is that you can listen to some good music while looking at the art on YouTube. You are better at research than me Graham - what do you think?

I think you are placing a 21st century mindset on early Christian artists Horseman. Byzantine art is highly stylized and influenced by Roman and Greek culture. I doubt any artist of the day would bother to track down distant relatives of 1st century Jews to check authenticity. This artwork is devotional in nature and doesn't need to rely on historical accuracy.
The earliest recorded Christian art also shows Greek and Roman influences and is represented by the Gentile Christian rather than the Jewish Christian who would never depict Jesus in art. Thus the earliest image of Jesus as the good shepherd carrying a sheep across his shoulders is clearly non-Jewish in style and influence. He has short hair and no beard and is depicted as a young man.
As an example of the mindset of artists of the early to Middle Ages and Renaissance some Biblical scenes use as a backdrop Italian architecture and landscape. The artist saw nothing wrong in mixing styles and locations. Historical accuracy was of little concern.

Sadly, I'm no expert on art history. I know little about Byzantine art.
A lot of what we do know about biblical clothing is gleaned from early mosaics and stone carvings from the time. These are helpful in terms of the style of clothing worn, but you wouldn't use them for figure reference.

It was interesting to read your comment Paul that Byzantine art is devotional in nature. This is probably why it appeals so much to you Horseman. Personally I prefer Bible art that has a gritty realism to it. I very much like the Biblical paintings of the danish painter Carl Bloch who I will be adding to the 'My favorite Bible artists' list at some point.

I must admit, I hadn't thought of looking on 'Youtube' for Bible reference. I must try that one!

There is no background information apart from the fact he is the "son of Timaeus" Anita. Anything else would be guesswork and rather pointless anyway. The parable doesn't concern itself with the biography of Bartimaeus. It's irrelevant. Faith in Jesus heals him. The reference to "Son of David" demonstrates the blind man recognises Jesus as the Messiah. As a metaphor - the blind see through faith in Jesus - God. This parable points to similar blind healings in Matthew.

Thank you for your blog posting. I have acknowledged it in a piece I have written here: http://ozhamada-observes.blogspot.com/2011/05/throw-your-cloak-away.html. My blog follows work as a Bible Study leader in Sydney, Australia.

Thanks for the link Ozhamada! I'll add a reciprocal one.

I just found this website. Many thanks!!! I have not seen your pictures but was attempting to find out what color the beggars cloak or cape or blanket would have been myself. I wish you could email me but I don't want to just put it here. I teach deaf children that have very little language (low verbal). I always have to depend heavily on pictures that are not "cartoon-like" as that conveys to deaf children that it is a picture of something that may not really exist.

Hi Deaf Teacher
Feel free to email me at
g.kennedy3@ntlworld.com

Was Bartimimaeus educated? I need to know thank you :)

Does anyone have any historical evidence expounding on the "official" beggar's garment? Specifically, who assigned it and for what purpose? Any insight regarding the garment would be greatly appreciated.