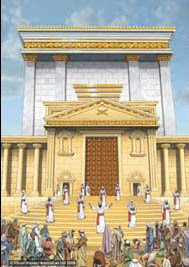 Just finished the pictures for the 'Ascension' story today. The picture (left) is the last one in a set of four and illustrates the very last verse of Luke, where the disciples were "continually in the temple praising and blessing God." Luke 24:53.
Dr Leen Ritmeyer reminded me that this verse doesn't mean that the disciples were in the temple building itself as "entrance to this building was reserved for the priests alone. Most of the activities in which ordinary (purified) Jews could participate took place in the 'Court of the Women', aka the 'Treasury' of the Gospels."

In the picture you can see the worshipers stood in the Court of the Women. This name does not mean that the court was restricted to women only. It was called Court of the Women because this was the closest that women could come to the temple. A gallery around this court was built later to separate the men from the women.
On the 15 semi-circular steps leading up to the Nicanor Gate you can see the Levitical choir.
"On these steps the Levites used to sing the fifteen Psalms of Ascents, which are Psalms 120-134". (Source:The Quest, pg 354)
Beyond the giant bronze doors of the Nicanor gate was the 'Court of the Israelites', then the 'Court of the Priests', then came the 'Temple Court' which housed the Alter and the Laver, and finally 12 steps, (4 sets of 3), led up to the porch of the temple itself.

The huge bronze doors should really be open, but then I would have had to illustrate the elaborate 'Golden vine' that was around the entrance to the temple! (I'm saving that for a later picture).
The Levites costumes are based on ones that I've seen in Temple institute artwork. The priests stood next to the Nicanor gate should be slightly smaller in relation to the gate as these doors were really huge!

There are four pictures in the Ascension set which brings our total Bible picture count to 715. These pictures will be added to the Bible picture website shortly.

Related posts:
What did Herod's Temple look like?
Posted by Bible artist at 9:58 pm

Email ThisBlogThis!Share to TwitterShare to FacebookShare to Pinterest
Labels: Bible pictures, The Ascension