Baby in a Basket 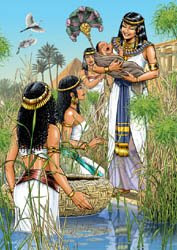 The earliest sources of pictorial information regarding clothing in Bible times comes from the ancient hieroglyphics found in the pyramids and tombs of Egypt. These pictures carved in stone not only provide us with detailed information on Egyptian clothing, they also record the clothing worn by other civilizations such as the Philistines.
Stone carvings found in the temple of Ramesses III for instance shows the armor worn by the Philistine captives. This gives us an indication of what the armor worn by Goliath may have looked like.

I've just finished the picture (above) depicting baby Moses being discovered in the bulrushes by Pharoah's daughter and her handmaidens. Because there is such an abundance of historical reference available for Egyptian clothing, Bible artists have no excuse for getting it wrong. There is one problem though. When producing pictures for children's Bibles we must choose modesty over accuracy! Egyptian handmaidens, (especially when working in water), wore little or no clothing, and much of the cloth used at this time, (due to the hot climate), was a very fine linen which was cool but see-through!
When Harold Copping illustrated the finding of Moses, he chose accuracy over modesty. His depiction of this scene must have caused many a raised eyebrow when it first appeared in the Copping Bible in 1910! It's possible that Copping was influenced by two well known paintings from that period, both with the same title 'The finding of Moses'. The first painted by Frederick Goodall in 1885, the second by Edwin Long in 1886. It would appear that nudity in Victorian paintings was legitimised when depicting either a biblical or historical subject. This fact possibly influenced the Bible artists of that period. It's true to say that Copping's picture would not find its way into a children's Bible today! Although the children's Bible that I have, which does contain this picture, was published as late as 1958.

I've mentioned in the past that there is sometimes the temptation to start illustrating a Bible story before reading it!
We think that we know a particular Bible story so well that there's no need to re-read it. The story of 'Moses in the basket' is one of those stories. When I was reading the story again, I noticed something that every artist who has illustrated it, (at least in all the children's Bibles that I own), has missed. Verse 6 of Exodus 2 clearly says "...the babe wept". In all the pictures that I've seen depicting this scene, Moses is shown to be lying quietly in the basket.

After doing some research I found that the brown torpedo-shaped pods that are often depicted amongst bulrushes by Bible artists are in fact Reedmace. True Egyptian Bulrushes are topped with green pom-pom type heads. (See picture above). This illustrates another point, that Bible artists are heavily influenced by the Bible art that has gone before.
The ark of bulrushes was a vessel made of woven papyrus stalks which was made watertight with a mixture of bitumen and mud, probably from the river Nile. (Mud from the Nile was also used to plaster buildings). I did illustrate this mud covering on the basket but it didn't look as nice as when you could see the basket weave, so I decided to leave it off. This might be the reason why other artists have chosen not to show a mud covered basket also!
Palm trees along the Nile are slightly different too. Rather than the branches forming a complete globe shape, the leaves grow upwards forming a half circle.

I hope this has been helpful. As always, I look forward to your comments.
Posted by Bible artist at 3:52 pm

I very much appreciate your excellent rendition of baby Moses in the bulrushes found by Pharoah's daughter and her handmaidens. The extent of research rendering accuracy and verisimilitude by analyzing the pyramid paintings, and the precise type of bulrush species is very impressive. The issue that the artist struggles with regarding accuracy versuses modesty is quite challenging. Probably one of the earliest (if not the earliest) depiction of this scene is found on the west wall panel 18 of the third century Dura-Europas Synagogue in Syria. In this mural, Pharoah's daughter is depicted in the nile with very little clothing. The baby basket is illustrated as a little house as opposed to a basket. This is most likely based on the annoymous artist's literal translation of the Hebrew words for the basket; "Tavat Gomeh" or "ark of bulrushes", hence the rendition in that mural of the basket as a little miniature Noah's ark. Also in your painting, Graham, the clothing of Pharoah's daughter and handmaidens are quite similar. One can identify the princess because she is the one who is seen in frontal view holding the crying baby. I wonder if the princess may have worn clothing distinctly different and more elaborate and royal compared to her handmaidens thereby denoting her elevated status. Thanks for a very beautiful and poignant rendition of this biblical story".

Many thanks Nahum, these comments are extremely helpful! Yes I agree, the clothing on the handmaidens is very similar to those on Pharoah's daughter.
This did go through my mind when I was illustrating it. I had so much reference for Egyptian clothing that I was trying to cram it all into one picture!
Very good point!

I will Google the Dura-Europas Synagogue to see if I can find an image of panel 18. Fascinating stuff. Many thanks again!

Graham, Another question I have had, in some of the illustrations of the children of Israel, the illustrator has the men and women wearing clothing that only covers one shoulder. I'm thinking of one scene of Hannah and Elkanah taking Samuel to the priest. They are both wearing one shoulder clothing. I had read the description of the Egyptian dress also, and wondered if my perceptions are incorrect. As in one would want to be more careful wandering in the wilderness in regards to modesty in all areas. What is your take, which way is more accurate? I don't care for the 'off the shoulder' style myself, but it isn't as in your face immodest as gauze covered Egyptians. Deboraw

Hi Deboraw
I have seen a number of Bible illustrations where the artist has used clothing that only covers one shoulder. Harold Copping is one example. I have on occasion drawn it this way myself. I believe that this was one of a number of ways that clothing was worn in Bible times.
I personally wouldn't have a problem with this in terms of modesty.

When it comes to the children of Israel wandering in the wilderness I always imagined them to be fairly well covered for two reasons. Firstly they were traveling with all their possessions, and secondly, to protect them from the elements, in the same way as the Beduin tribesmen do.
I'm not sure that I have answered your question fully, you may have something else in mind.

Graham, No, you have answered the question--. And I would think in the same way for much the same reasoning. A number of years ago while studying to go as foreign missionaries our teacher told us that for no reason should the wives go into the 'bush' (for teaching, etc.) it was not only unwise, but unsafe. And I would think that would have been an added incentive for the modesty element for the Israelites even in those times, but maybe not. Also, thank you for taking the time to answer. Smile--Deboraw

According to Alec Garrard's book 'The Splendor of the Temple' The booths or stalls of Annas, where items could be purchased for sacrificial offerings such as cattle, sheep, doves, flour, oil and wine, were located in the Outer Courtyard of the Temple, outside of the original Temple area so as not to infringe the Law of Moses.

It seems to be true that bulrush more properly refers to rushes in the sedge family, rather than to reedmace, or what I would call cattails--but I don't know of any Bible translation that says Moses was found among bulrushes.

KJV, for instance:
...she took for him an ark of bulrushes, and daubed it with slime and with pitch, and put the child therein; and she laid it in the flags by the river's brink...
And the daughter of Pharaoh... saw the ark among the flags...

So he was found among flags, in a basket made of bulrushes. Flag in modern English would mean iris, but that's probably not right. The Hebrew word that's translated as "bulrushes" there is gome', which seems to mean papyrus, which is what you drew.

But the word given as "flags" is suph, which modern translators usually render as "reeds". The same word is used in Jonah 2:5 apparently to refer to seaweed, so it may mean something more general like "weeds" or "water plants."

For illustrations, I think any vegetation native to the Nile would be reasonable.

Hi Dave
Thanks for that. Yes, I did notice that the bulrushes were not mentioned. I came to the same decision as you that any vegetation native to the Nile would be acceptable.