I've received a few updates recently from Bible artists around the globe that I would like to share with you. There are also a number of new children's Bibles about to be released which I'm sure you'll find interesting.

'The ICB Big Red Holy Bible, Contemporary 3D Art Edition', (not sure who came up with the snappy title), is due to be published next month and is illustrated by A friend of mine Graeme Hewitson. Graeme tells me that the cover of this bible has a "really cool 3d effect" which should be interesting. The Bible contains Graeme's very cool 3D artwork which the publisher Tommy Nelson is hoping will appeal to 'today's video-game generation'. This is a bold move away from traditional Bible art, and if its successful, will no doubt have other publishers following their lead. This will be good news for all the CG artists out there. There's a facebook movie promoting the ICB Big Red Holy Bible...etc etc here. Graeme has promised me a signed copy which I look forward very much to seeing. (Thanks Graeme)

Keith Neely has finally completed the ICB Illustrated Bible series and the first copies should be back from the printer early October. More details about the new 'ICB Illustrated Bible' can be found at Keith's new website www.freeillustratedbible.com which is packed with information including a very interesting 'How we created the Illustrated Bible' page.
Keith is looking for a publisher/distributor in the U.K. to distribute copies here, so if you're interested contact Keith.

As I've previously mentioned in the 'Shanah Tova' post, the latest volume of the Modern Hebrew Children's Bible will be on its way to the printer next month also. This will be the fourth out of five volumes and includes the books of Job, Psalms and Proverbs. The Modern Hebrew Children's Bible has been illustrated by our friend Diana Shimon in Israel. 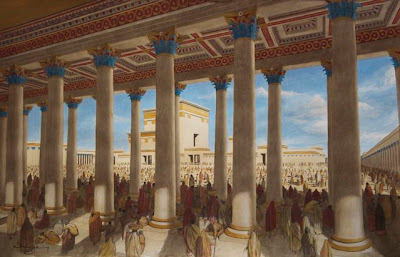 Balage Balogh has launched a new website Archaeologyillustrated.com which is devoted entirely to his Bible Art. Balagh sent me his latest picture (above) which I'm sure you'll all enjoy. (Click on the picture for a bigger version). Balage describes the scene as "...an illustration of Herod the Great's temple from inside the Royal Stoa during a major Hag, maybe Pesach." Don't forget to check out Archaeologyillustrated.com, you won't be disappointed. 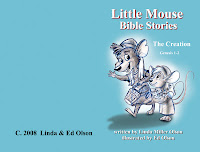 I was also contacted last week by Ed Olson who has been working on a new book project with his wife Linda which is based on Creation. To learn more about this project and to see a dummy of the book click here! Ed and Linda are looking for a publisher - so, if you're interested contact Ed.

In closing, I'm hoping to be interviewing CEF's Bible artist Tim Shirey over the weekend for the Bible illustration blog so I'm looking forward to that. Tim is one of our regular contributors to the B.I.B and is based in Switzerland. Jewish Bible artist Nahum HaLevi will shortly be adding his latest painting titled 'Ezekiel' to his website. As usual, this will be accompanied by a lengthy and informative description which I've had the privilege of reading already, (Thanks Nahum).
As always, I look forward to your comments!
Posted by Bible artist at 1:27 pm

Balage Balogh's paintings are stunning! He must have a huge amount of patience to go along with all that skill. Thanks for updating us on all these wonderful new Bibles coming out.

It was my pleasure Matt!

This Blog was added to http://searchinthebible.com, if you want watch christian preaching, download christian music and books for FREE visit the Site.

I came across your site awhile ago and have since ordered a copy of the Great Bible Discovery (Beginnings). I have thoroughly enjoyed looking through that and now, I'm afraid, I'm hooked biblical illustrations.

Searching your blog, I tried to find any comments on The Picture Bible by Iva Hoth but I didn't find anything. Do you have an opinion about that series?

Thanks for a great blog!

Just hang on, Greg, I'm sure Graham will have a comment on that. Smile--

I found good information here.The purpuse of the wool tallit is to hold the Tassels, so the Tallit itself has no religious meaning.

Greg:
Hi Greg, yes 'Beginnings' is a good one from this series with artwork by both Paolo Eleuteri Serpieri and Victor de la Fuente. I've got a spare volume 5 too if you're interested?

The Iva Hoth Bible is a good one with nice artwork by Andre Le Blanc. I only have a small black and white paperback version covering Genesis to 1 Samuel and the pictures are fairly small but it's still great! It's amazing how much work has gone into this. Some might consider the artwork dated now but it reminds me of all those great DC comics from my childhood!
Paul G has the colour version - what do you think Paul?

Samual:
Thanks Samual, this comment should be on the 'Techailet Tzitzit's and Tallitot!' post as it ties in nicely with Patrick's recent comments on the tallit.

Hi Graham: I didn't realize you were talking about a Bible I owned. :) Andre Le Blanc's artwork is a traditional style with a layout that might be seen as boring these days. Sometimes the fine line work breaks up a little in reproduction. Probably due to the fact it was illustrated larger than the printed page.

It isn't a dynamic or flashy Bible. Just a simple straight forward style that tells the stories without any need to cater to the reader by adopting trends that will look dated in ten years.

I might add by "simple' I mean traditional pen, brush and ink work. Not manga or digital colouring. The artwork is detailed and slick. An amazing amount of work and research has gone into it. I would definitely recommend it.

Graham, This is somewhat off the track, but in one blog you hinted that someone would perhaps be reissuing ? some of Elsie Anna Wood's work. I was wondering if you have anything more you could tell us about this occurrence? I still love her work and am very interested in it. Deboraw

Paul:
Thanks for that Paul. Yes, it amazes me when I look at some of the strip versions of Bible stories just how much research the artists have done.

Deboraw:
You're absolutely right Deboraw. I think that it was Tommy Nelson who were looking at doing a children's Bible using EAW's artwork which would have been superb. I suggested that Dr Sandy Brewer should write a foreword for it. I've not heard anything else since so the idea may have been shelved. A great pity. Publishers should seriously look at doing one.

Andre Le Blanc is the man! His artwork is awesome, and despite the fact that he didn't have the luxury of flashy computer colouring, his stuff is still one hundred times better (I figured that out scientifically) than most of the stuff out there today that does use computer colours. Too many people these days (me included) cover up their lack of artistic talent by smothering their artwork with hatch lines, details and colours to cover over the multitude of rendering sins. Not so with Andre Le Blanc; that dude knows his way around the drawing board.
My two cents.

I agree about digital coloring. So much bad art is disguised with bells and whistles. You look at some of the work in black and white and it's lacking. That's why I love b/w graphics over color. Most of the the European artists in the old British comic books used intricate b/w work (Steel Claw is a great example) that required no colouring.
As for colour just look at the Look & Learn artwork to see great illustrators at work. All painted by hand.

Yes, sometime ago I searched out and purchased a few of EAW's prints, but have since gotten bogged down in 'too much ado about nothing'. :<

Guess I'll have to get back to looking again. Deboraw

Matt:
I agree. Paul G knows that I'm a fan of Curt Swan's comic Art for the same reason - his line work is so precise and clean and his anatomy faultless! On the subject of cross hatching, I was never a big fan of it until I saw it done properly - some European artists have got it down to a fine art! In the past I always concentrated on the slickness and smoothness of the brush line but I realize now that black line work is not just about a neat outline, but when done correctly it can capture lighting, shape and texture too, even before colour is added!

Paul:
It's not just digital colouring that enhances todays artwork, its all the effects that you can add like blurs, textures, distortions etc.
The emphasis is not on line work as it used to be, line work is now UNDER all the sfx, whereas it used to be OVER the colour! Having said that, if photoshop was around in the 60's all the great artists of the past probably would have used it! The work done then had to be precise as you couldn't just click the 'History' tab to go back when you made a mistake!

On the subject of Look & Learn - here's a great collection of artists who really knew how to combine line art and colour to amazing effect!

Have now received my complementary copy of Graeme Hewitson's Bible, (Thanks Graeme!)
Graeme's pictures are excellent - as is the print quality.
The glitter effect on the cover is too much as it obliterates the cover images other than the figure of Jesus. The publishers are going to tone this down for the hardback edition. The hardback edition is also going to have an embossed cover too which should look nice.
This Bible is smaller than what I imagined - it's about the size of a large paperback. For some reason I always expect books to be bigger than they actually are! Every time I buy a children's Bible via the internet - they're always smaller than I imagined!