Writing in the sand! 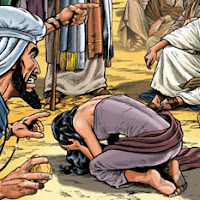 The latest Bible picture story to be added is the 'Woman caught in the act of adultery' (John 8). If you need pictures of this story, click here. The story takes place in one of the sandy floored courts adjoining the main Temple. I presume that the flooring was sand, as the Lord Jesus stooped down to write in it, and what He wrote could clearly be read by those who stood around. According to Jewish law, it was unlawful to write even two letters on the sabbath day, but it was acceptable to write in dust! (shabbat 7:2, 12:5)

There's been lots of speculation as to what the Lord Jesus wrote in the sand that day. Some suggest that it was a list of sins, others suggest that it was a list of the names of those stood around. I often wonder if it was something like, "This is a list of the sins committed by......", and then He stopped writing and waited for someone to cast the first stone.... no one dared! For whatever reason, the Bible does not record what was actually written.

In picture 2 the pharisees are pointing with the finger of their left hand, (The hand with the phylactery strapped to it!) emphasizing their confidence that the full weight of the Law supported their accusations. In fact, the Law stated that both the woman, and the man should be stoned, but where was the man?

In picture 3 you can see the accusers starting to leave, beginning with the eldest first. The older we get, the more honest we should become about our sinfulness before God.

This story contains 5 pictures and brings the total picture count to 656!

Posts on other Bible stories
Blind Bartimaeus
The Rich Young Rular
Zacchaeus
Crucifixion part 1
Crucifixion part 2
On the road to Emmaus
The Nativity
Raising Lazarus
Posted by Bible artist at 10:30 am

You can check out the Christian Manga at http://www.realbuzzstudios.com/index.html.

Thanks for commenting at my site.

Thanks Jackie
I'll add them to my link list.

Here's a link to my current online gallery..

Hi Artistxero
You've got some really nice stuff in your online gallery. I will add you to my 'Bible Artist' link list.

I have been asked this question before. It's not an easy one to answer. In my own case it was circumstances that arose over a period of time which led me to becoming a full time Bible artist. It's a very long story!

Don't worry too much initially about earning a penny! Find a christian, or a missionary who needs Bible pictures, help them out....and see what develops! If it's meant to be, it will happen!
God bless

I was reminded of this scene today when CNN reported the news of a young woman being stoned to death in Iraq. Her family and others dragged her out into the street and kicked and stoned her to death while some captured the atrocity on their cell (mobile) phones. I couldn't watch the footage but could hear her screams. The men just joined in or watched as she died. She was a beautiful young woman with her life ahead of her and died because she fell in love with a man of a forbidden tribe/religion.
Jesus was, and still is a revolutionary figure who dared to step in to stop such a killing. Clearly nobody in this 21st century village had heard of his teaching or cared to listen. And nobody dared to save this young woman or even cared enough to stop her murder. Why? Because it takes courage to stand against the crowd. Jesus clearly had such courage.

A very sad news item indeed.
Gods Grace is a foreign concept to many.

Yes, it would have taken great strength of character and bravery to stop such an evil act.

You get posted your blog here for free.
Tahnks

The key to the writing in the sand, is not the writing itself (it isn't important otherwise the gospel writer would have mentioned it), but the fact Jesus wrote, and caused a delay. The delay proved the mob only wished to stone the woman IF Jesus gave the authority. Then they could claim Jesus went against Rome (the only power allowed to execute)and have Jesus executed as a rebel.