This is the third 'Guest article' written by Paul Green for the 'Bible illustration blog'. 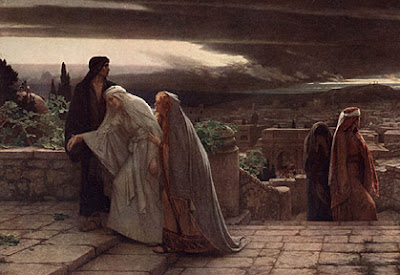 Herbert Gustave Schmalz (1856-1935)
Born near Newcastle in 1856 to a German father, Schmalz moved to London at the age of seventeen before enrolling at the South Kensington Art School and later, the Royal Academy. After studying in Antwerp, Schmalz returned to London to establish his career.
Time spent in Jerusalem in 1890 served him well for his New Testament work in the years to follow. A mixture of Pre-Raphaelite and Victorian Neo-Classicism the paintings are effective for their atmospheric use of light in creating a mood of foreboding and sorrow.
In “Return From Calvary” (1891) the woman looks over her shoulder to the three crosses on distant Golgotha, overshadowed by dark storm clouds. The light in the far distance foreshadows the glory to come.

“The Solitude of Sorrow” (1905) shows Jesus undergoing his temptation in the desert. The painting reflects the inner struggle and isolation of Jesus as he prepares the path for his imminent ministry.
Text © Paul Green 2008.

Thanks for introducing us to 'Herbert Gustave Schmalz' Paul.
He was yet another artist who visited Jerusalem in 1890 to make sketches!
His travel sketches were published in the 'Art Journal' under the title 'A painters pilgrimage'.

It sounds like, at the turn of the century, Jerusalem must have been bustling with Victorian artists!

I've always admired an etching of 'The Return from Calvary' a friend has hanging on his wall. Good to see someone blogging about Schmalz.

Thanks Stuart. I feel the strength of this painting lies in the fact it focuses on the reaction of those who loved Jesus. The masterly lighting of the landscape adds to the effect of loss and grieving as does the distance between them and the crucified Jesus.

Thanks for the feedback Stuart!

In response to a query I received recently regarding the value of an old print of "Return From Calvary" I found the following information at a recent art auction. Sadly for anyone thinking they have a valuable print in their collection this isn't great news.

Thanks Paul. You would expect a print from that period, (that's in good condition) to be worth a lot more.
I'm always amazed when I see original paintings from this era (on the Antiques Road-show) being valued at low prices. Some of the artists are surprisingly well known too.
I remember seeing a really nice water-colour landscape about 15 years ago that was valued at £1,200. I'd drawn a picture of a cartoon elephant that week for the same price-!!

Having said that, that particular water-colour will no doubt have increased in price since then, whereas my elephant artwork is probably rotting away in a land-fill site somewhere!

I have a print of Return from Calvary. in my print, there is a third person walking up the steps, behind the two women looking back. are there two different versions of this print?

I have looked at various sites to see if there is a recognized version with three people on the steps. All versions are identical to the print I placed with my article. Two women only.
If you could take a photo of your print and e-mail it I'd be interested in taking a look so I can comment on it further. Just click on Paul G and my e-mail link. Thanks.

If you go to:
passionforpaintings.com and type 'Return from Calvary' in the search box you will see a reproduction of the Herbert Schmalz painting which looks like it might have a third person climbing the stairs. The colors in this picture are different also.

If you search for this painting in Google images you will see a black and white version which clearly shows the third person on the steps!

I also read that there are some very old black and white prints of this picture that were hand tinted with colored inks.

I see one version that's a chocolate box copy by the artist Gwyneth Holston. There appears to be a third person on the steps. But this copy isn't worth talking about because it's so mediocre compared to the original.

The painting on the website featuring the third person states it's an oil painting reproduction. The quality is clearly inferior. I have yet to see an original Schmalz featuring a third person on the steps.

I'm the artist, Gwyneth Holston, that did the copy of 'Return from Calvary' for a painting class. I copied it from a print that did not include the third person on the steps, but I have seen it in other later prints. The composition is just extraordinary either way.

Sorry to be so harsh on your painting. I also copied famous paintings at art classes when I was younger. It's an excellent method to appreciate the work of great artists. Both for color technique and design. You chose a worthy subject.

I have an original version painted in 1891 that is numbered and has some type of seal on the frame on the top left hand corner and this copy includes a third woman descending the stairs looking up and around at Mary weeping. I love this illustration and it has been passed down from my great grandmother to grandmother and then left to myself. It has hung in the living rooms of us all and is simply stunning.

Congratulations on owning an original painting. I agree it's a wonderful painting full of atmosphere and emotion.

I also have the picture with the 3 people in it. Mine has damage to it, "ripes", I have put it in a frame just to prevent any more damage. how can you tell if it is a original?

Well the obvious answer is - is it painted or a print? If you can feel the texture of the paint then it's an original of sorts but not necessarily by Schmalz. Look for the autograph and any date.
Millions of prints have been made of this painting through the years. They have little to no monetary value.

hello! how are you? i have 3 pieces from the schmalz collection, stamped and signed, can you help me?
bigman77571@aol.com

I have a painting from Herbert Schmaltz, I bought it at a yeard sale in Ca. It's a black and white pic,( The return of Calvary) it seems to look very antique, my question is : could it be worth something?

I have owned a signed and stamped print of "Where is my lord the king?" for 30 years and was wondering if it had any value?

I have just discovered in my attic a print of the return from calvary. Its size is 40" by 30" and features the third women on the steps . I know this print has been in my family for at least 70 years. Does this have any value?

I have just discovered in my attic a print of the return from calvary. Its size is 40" by 30" and features the third women on the steps . I know this print has been in my family for at least 70 years. Does this have any value?

Seems the Prints as i read above are not very valuable. I to have one from 1891, signed, with the wood frame.

I've been told that If it's a signed lithograph it will have some value.

P.S. Just to remind everyone again - we don't do valuations!