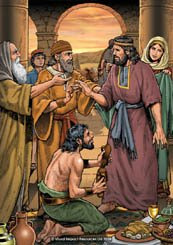 The latest set of Bible pictures to be completed is a new version of 'The Prodigal Son'. There are 9 pictures in the set which brings our total Bible picture count to 738. This set will be available shortly from the 'Bible Picture Website'.

Picture 1 shows the son asking his father for his inheritance.
Picture 2 shows the son leaving home. There's a look of excitement and anticipation on the son's face, but the father's heart is heavy.
I was reminded, when illustrating this scene, of the Norman Rockwell picture 'Breaking Home Ties'. Rockwell's picture always reminds me of the time when I left home at the age of 17 to train as a cartoonist in Scotland. My Dad always wore overalls just like the Dad in Rockwell's picture.

Picture 3 shows the prodigal son partying! Picture 4 shows the prodigal walking through a hot dusty scene. His clothes are worn and the sun is blazing down. There are carcasses of animals lying around to indicate the famine in the land. Picture 5 shows the prodigal with his head in his hands surrounded by pigs. The pigs are feeding on the pods that are scattered on the floor around him.

Picture 6 shows a view from one of the upper rooms of the fathers house. We are looking over the shoulder of the father who is looking in anticipation towards an approaching figure in the distance. It's a very peaceful evening scene bathed with a pinkish glow from the setting sun. the cattle and sheep are grazing. Two servants are sat on a nearby roof cooling down and another servant carries a water jug across the courtyard below. There are no signs of famine here!
The stone balustrade across the bottom of this window is based on one of Dr Leen Ritmeyer sketches shown in the Houses in Bible times post.

In picture 7 the father hugs his son. Picture 8 (above) shows the servants following the command of the father by putting a ring on the son's finger, shoes on his feet and giving him a new coat to wear. You can also see the fatted calf being led away in the background. I was reminded recently by a friend of mine (Paul Rockley) that the ring was a symbol of acceptance, and that the sandals denoted the son was now a free man (slaves went barefoot).
Notice also in this picture that the servants all have an earring in their right ear. This was a way of showing how kind this master was to his servants. They had served the master for six years according to the requirements laid down in Exodus 21:1-6 and could have gone free, but chose rather to be bond servants, or bond slaves.
A slave could choose whether he wanted to go free after six years service. If they loved their master, he or she could stay on as a bond servant. The ceremony for entering bond service was as follows. The freed slave was taken to the entrance of the house, and his or her right ear was pressed against the door or doorpost and then pierced through with an awl (a spike). An earring was then worn as a symbol to all that this man or woman was a servant by choice and could neither be bought or sold.
(see Ex 21:1-6 and Deut 15:17). Both Paul and Peter referred to themselves as bond servants of the Lord Jesus.

Picture 9 shows the father speaking to the angry brother. celebrations are going on in the house behind them. There is a golden glow from the house which falls onto the father, but not the brother. He is in the foreground with his back to the house and lit by a separate light source, the moon. This was to emphasize that the brother wanted no part in the celebrations.
All comments welcome.

Posts on some other Bible stories:
Blind Bartimaeus
The Rich Young Rular
Zacchaeus
On the road to Emmaus
Raising Lazarus
Woman taken in Adultery
Feeding the 5,000
Healing of the Ten Lepers
The Ascension
Parable of the lost coin
The Temptation of Christ
Jesus in the Temple
Posted by Bible artist at 3:19 pm

Graham, Sometimes you have to live through both sides of the 'losing, and leaving' part of life, to understand life. We have had six of our seven children leave, some stomping out and 'I'm never coming back'...but they all have. One told her sibling "I'm so embarrassed after the way I stomped off. It really bothers me to come home now." Her brother said, "It never bothered me."

The picture's a bit small to see all the details you are referring to, but I like the description of all the detail you put into it.

I remember hearing some preaching about this story on the radio or something, and the guy said that sometimes, if the child is determined to go that way regardless, you just have to allow them to make the mistakes and suffer the consequences, usually coming back better--lesson learned. He also noted that the father went running out to meet his son when he saw him in the distance.

This parable seems to be more about the loving father than the prodigal son--at least that's what I always love about it.

Graham, (and Jumbo) I thought it was just my eyesight that I couldn't see all of those details, lol. What a comfort! Deboraw

Yes Deboraw, part of life is going through both the 'leaving and losing'. I remember finding it very hard when our son went to University.

Sorry that the picture is so small Jumbo. Sadly, if it was any bigger, it would be used without permission!
People forget that it's the sales of the Bible pictures that fund the production of more.

The day that I was illustrating picture 2, (the son leaving home), I could hear from my studio window one of my neighbors and his wife saying goodbye to their son and family who were moving abroad to work.
My heart was very heavy for them.

Wow, I bet that added a lot to the image though.

I think you might be right Jumbo. I inked in the crucifixion scene on Good Friday of this year and it was a very special time.

Yes, that's what I'm meaning. As you say good bye to your own family, and you learn what YOUR own parents must have felt...it all adds a dimension, an understanding of God the father's feelings. Most of us can remember being young (and perhaps slightly foolish, hmm) so that base is already covered. It all adds character to your work. Deboraw