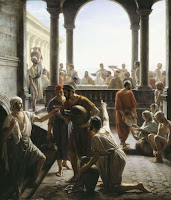 This is the second in a series of 'Guest Articles' by Paul Green of Virginia.

Carl Heinrich Bloch - born on May 23, 1834, Copenhagen, Denmark.
In 1865 Bloch was assigned to illustrate the life of Christ, in a series of 23 paintings for the King's Praying Chamber in Frederiksborg Castle Chapel, Denmark. It would take Bloch almost fourteen years to complete the commission. The resulting paintings would define his career and would be complemented by eight altar pieces and an outstanding series of 78 etchings, influenced by Rembrandt’s depictions of Christ.

Following the premature death of his wife in 1886 he was left with the responsibility of his eight children. The grief and stress proved to be too much and he died of stomach cancer in 1890 at the age of 56. In addition to his Biblical art, Bloch was renowned as a genre and portrait painter and served under various positions at the Royal Academy of Fine Arts.

Bloch’s painting 'Marriage At Cana' (above) depicts the reaction of the servers as they realize the water has been transformed into wine. The figure of Christ looks on from a distance from his seat at the wedding table. The masterly use of lighting bathes Jesus and the wedding guests in bright daylight as one of the servers in the foreground points to the source of the miracle. 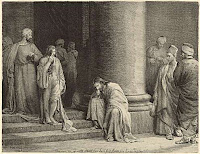 The etching 'Writing in the Sand' (1889) depicts a thoughtful Jesus in stark contrast to the accusers of the woman caught in adultery. Their desire for justice under the law which requires the stoning to death of the woman is countered by Jesus calmly writing in the sand. Jesus becomes the focus of attention as some reflect on their own actions and turn away.
Text © Paul Green 2008.

I'd like to add a brief footnote to Paul's article.
Like many artists, Carl Bloch struggled with doubts about his own abilities. Later in his career, these doubts were replaced by an intense conscientiousness regarding what he considered to be his calling, which was to paint scenes from the life of Christ.

During his short life, Bloch produced around 250 paintings, but considered his alter paintings to be his most important work!
For more of Bloch's Bible Art, click here.

Thanks Paul. You introduced me to the work of Carl Bloch many years ago.
I love his Bible work. He is on my list of 'favorite Bible artists' that I want to blog about, but you beat me to it!

Hans Christian Anderson, after meeting Carl Bloch wrote to him saying:
"When at last we met, you were, as I perceived, like a child, yet full of manly wisdom. Humble, in doubt of your strength, yet certain of your God-given calling, otherwise it would never have been fulfilled."

Bloch's paintings are believable in contrast to the slightly surreal Bible art that came from some of the Pre-Raphaelite painters of his time.

With eight children running around it's hard to imagine how he got any painting done! When my three were small, I could at least work when they all went to bed. But in those days, artists could only work in daylight hours!

Remember in the 1800s there were less distractions Graham. No television, radio, internet, phone, shopping malls, cars etc. I would imagine an artist could be more focused in general. But eight children is a major distraction in any century! :)
I guess artists could work by candle or gaslight by night but it would be a strain.

I like how everything seems to point to Christ - the man kneeling, the tile lines in the floor, the architecture lines all work together to point to someone in the distance. The lighting draws the eye as well. However, I cannot tell if the figure in the distance that is being pointed to is Christ or Mary. If Christ is in white with the head covering (prayer shawl) then all points to him. But if that is Mary and Christ is sitting to her right, then all points to Mary. Maybe someone has seen a larger picture and can tell. If the figure in white is Mary, then this would suggest to me that the artist was Roman Catholic. Even if this is the case, it is a great picture. The genius is in the lighting - it is what gives it a spiritual feel.

Good point horseman. The server does appear to be pointing in the direction of the woman at the wedding table. This may be intentional or it may simply be a case of the server pointing in the general direction of Jesus.
My guess is the woman is the bride. The woman to the left of Jesus is probably Mary as there is no reason for Mary to be seated at the centre of the wedding table.
This miracle does foreshadow the Last Supper. Water to wine to the blood of Christ. Bloch could well be highlighting the bride because this is her time. Jesus is the guest and even though he occupies a prominent position at the table notice he is not in the centre.

I think you ment to say that the woman to Christ's left is NOT Mary - "as there is no reason for Mary to be seated at the centre of the wedding table". If the woman is youthful looking, indeed she would be the bride and not Mary - who would show some age by this time. What you suggest does make more sense!

Yes I meant left looking from our viewpoint. Right from Jesus' viewpoint. The bride is seated in the centre.

You mentioned Blochs "Masterly use of lighting" Paul, and I noticed that horseman picked up on that too!
Brilliant lighting is a feature of all his paintings.

The marriage feast at Cana, the first of the signs, is unthinkable without the mother. It is on her request, and it is her instruction to the servants - "Just do what he says". I personally am more comfortable with the translation that really explains the significance of the connection of mother and son - "Woman, this has to do with you and me." That is to say, this sign, at a feast of marriage, has to do with what proceeds from the relationships of bonding and marriage - the mysteries of the blood.
Also, in another aspect, compare the youthful appearance of Mary in the "Pieta" sculpture. The artist in that case when questioned said, 'Don't you know that virginity keeps you young?!"

I think you've either misread or have a weak translation of the passage you quote - "Woman, this has to do with you and me."
This is not correct.
In fact it's the exact opposite of the two translations I have -"Woman how does your concern affect me?" (New American Bible)or "Woman what do I have to do with you?"(New American Standard)- (John 2:4)
The Greek version translates as: 'What to me and to you, woman?'"

The first sign points to Jesus - as all the signs do. Mary merely facilitates the miracle which centers on the transforming power of Jesus (God).

Concerning the "mysteries of the blood" the wine at Cana also points to the blood of Jesus. Jesus (God) transforms his blood sacrifice at the crucifixion into everlasting life at the resurrection. All signs point to Jesus and nobody else.

I understand why you are of that opinion. My comment stands as it is.